A FAT MAN AND HIS DOLLIES

So what did i get for Xmas? What was my brilliant, jaw-dropping pressie?
I got dollies.
Seriously. I got a couple of dolls.
Now, this is what I mean when I talk about the best thing about gift giving being the zing, the AHA! moment.
That excellent Tasmanian writer Tansy Rayner Roberts has a sideline. Deepings Dolls, a company that specialises in hand turned wooden figurines with the most delicately applied painted costumes you’ve ever seen. They’re elegant, and delicate, and visually quite beautiful, and I’d never in a million years think to buy one for myself.
But Lyn did. What’s more, she really thought about it, and so, on Christmas day, I found myself not only holding a couple of dolls, but holding the main characters from Napoleone’s Land: Napoleone Buonaparte and his teenage bride, Mary Pitt, the illegitimate daughter of the English Prime Minister.
One-of-a-kind orders, not on the website, absolutely unique wooden figurines designed and created for me alone. Nobody else in the world owns them. They are mine alone.
Honestly, is that not the most brilliant present you can think of someone getting? 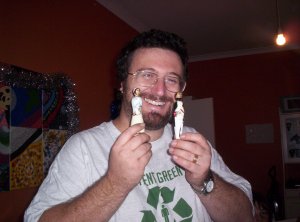 A fat man and his dollies.

ON PRESENTS, AND THE DIFFERENCE BETWEEN GIVING AND RECEIVING

Well, I gotta tells ya, I love receiving presents. Receiving presents is tops. But when it comes to my family, what I really love is finding presents. There’s a moment, when I’m standing in the shop, and I’m either there for a clearly-viewed purpose or just because I had a vague idea that something would be within these walls, and I see the perfect gift for one of my family and the thrill of AHA! zings across my skin….. brilliant.

The sushi kit I gave Lyn, the make-your-own-brain kit for Aiden, Blake’s CSI facial reconstruction kit, the PS2 version of the Playboy Mansion game that Cassie’s been begging after for two years and is now old enough to actually have, Erin’s Dora the Explorer toy computer, and Connor’s…… well, everything, really. He is two….. everybody got something that dropped the jaw, lit up the eyes, and resulted in a chest-hug and happy-squirm. The gifts were many, and varied, and some of them were bought and some of them were hand-made, and all of them were greeted with thanks and hugs and the occasional kiss. Christmas may be grossly commercial, and designed to skin your flint, but the truth is that it’s really what you make of it, and we managed to make it about giving this year.

And then there were the books.

Last year, Lyn told me the story of her childhood book. I told her how my best friend Seanie and I used to buy each other second hand books for Christmas when we were poor struggling Uni students. And we looked at each other, and a light went on over our heads. And we decided that we would buy each other a secondhand book every Christmas: something used, and loved, and on a subject that the other wouldn’t buy for themself but will find cool when they get it.

It’s not the getting, it’s the finding.

So this year, I received a book listing the 100 things that influenced Australia most throughout the 20th century (and ohhhh, the arguments I could have….) , and Lyn recieved Gladiatrix: Story of the Unknown Female Warrior, an examination and discussion regarding a European archaeological find wherein lies a female warrior figure unseen in any other ancient grave site.

Next year, who knows? It’s going to be fun finding out, though.

And I survived!
I was going to do a big post about Xmas, but it’s much more fun for me to put together a photo essay, with comments.
The important bits: we spent the day at home with the kids. Many presents were exchanged. we were all in love with each other. It was tops.

What is this, and what do I do with it? 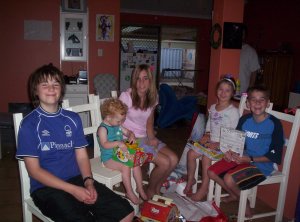 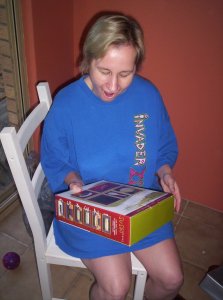 I think she likes it. (Camera-toting hubby breathes sigh of relief)

Merry Christmas to y’all from the Triffbatts!
Once I download Picasa tonight (3 free sets, Flickr? Get knotted!) I’ll put up a proper gallery of Christmas photos.
Hope yours was fun. Ours was.

Song of the Moment: Hungry Like The Wolf Richard Cheese

Reading: 20th Century Ghosts Joe Hill, the current issue of Alpha
WORKSHOPPING, ACROSS THE UNIVERSE (In the Starship Enterprise, under Cap… what the hell am I singing?)

So, for those who don’t know, I’ll be in Brisbania for an extra week after my Clarion tour of duty, and during that week, I’ll be giving a couple of workshops. Get your pens and paper out, dahlinks, for the details. They do follow:

Giving and receiving critiques is an important skill for any writer. Lee Battersby (that’d be me) will introduce you to proven methods of critiquing, suitable for writing groups and individual writers, and show you how they can benefit your writing. You will have the opportunity to practise using each technique on a supplied text, on your own work, and on works supplied by other participants.

War of The Worlds, Frankenstein, The Chronicles of Narnia… the speculative fiction genre- science fiction, fantasy and horror- represents some of our most enduring stories. Award-winning author Lee Battersby (still me) will lead you through a series of practical exercises for crafting attention-grabbing science fiction and fantasy. You will also learn how to research publishing markets and how to develop a unique voice. Lee will pass on skills for creating and publishing cutting-edge work.

For more information, contact the Queensland Writer’s Centre at Level 2, 109 Edward Street, Brisbane on (07) 3839 1243. You can visit their website and email, should you prefer.