Much movement on the Battersby writing front since the start of the year, ennumerated thus:

Congratulations to all Aurealis Award winners. The full list will be somewhere on the net by now: Luscious and I had them read to us at a party for just that purpose on Saturday night by the ever-lovely Tehani Wessely, who has finally seen the light and moved to Perth from far-too-close-to-the-centre-of-the-Oz-SF-Universe-for-its-own-good Brisbane. A good, chatty time was had by all. Special mention of the wonderful Anna Tambour, a truly lovely lady and unique writer who is finally getting the notice and reward she’s been due for a very long time.

A GOOD WAY TO START THE YEAR

Guess who sold a poem to Strange Horizons today? 🙂

IT OCCURS TO ME….

…that if the Daleks had been smart, they’d have made their battle armour out of Tupperware: not only would it keep their bodies fresh for longer, it comes with a lifetime replacement guarantee.

So, what are the kids doing mi-January? Want to sneak three days of artistic education under their radar, disguised as messing about with a fat idiot and his colleagues, and a field trip to a giant aquarium?

You need to have a look at this, then.

The KSP Write-a rama programme is always a lot of fun, and wonderful for kids creative juices. I don’t know what anybody else has planned, but my session, entitled “Writing The Weird” will be just that.

Head on over to Horrorscope, where they’ve just published a review of Horror in 2007, including a few words from myself.

So, writer boy. How did it turn out, then?

Actually, writing was one of the few bright spots last year. Not as many appearances as in previous years, but a solid number of sales without being spectacular. In the end, it looked a bit like this:

Given that I spent large portions of the year dealing with the script for The Memory of Breathing, pitching the novel, and engaged in the AHWA mentorship, I’m reasonably pleased.

The question now, of course, is:

There’s a lot to be done, Battfans. I’ve committed to delivering a Father Muerte novel to an interested agent by mid-year, plus I want to finish one of the three other novels into which I’ve made good ground- The Corpse Rat King, Clowntown, or The Death of Vaz Tey. As a result, I’m likely to lay down less in the way of short stories, although they’re still my first love, so I’d like to complete a good half-dozen or so. And if I can sneak one in sideways through the door while nobody’s looking, I’d like to at least complete a short film script, or work towards snaffling another contract for a feature film—it’s an exciting form in which to work, and I loved doing so in 2007.

So, you know, that and lose ten kilograms and focus on my family and attend Swancon and make greater inroads into our mortgage and slough away everything that made 2007 such a negative experience and reinvent some sort of social life and maybe have a holiday and do the mentorship thing again and…. yeah, that sounds about right…..

BEOWULF VS A TALKING BEAR

Beowulf 3D– Violent, clunky, beautifully animated, and glorious. Sure, there are weaknesses in script and execution: the scenes of people on horseback were clumsy, and what the hell was with a naked Dark Ages daemoness wearing high heels? But overall, this was supercharged, involving, and very human, and felt more epic than any movie I’ve seen since the Lord of the Rings trilogy. The best dragon in movie history was simply an added bonus.

The Golden Compass– What a fucking yawn. As if basing a large part of the film around Nicole Kidman, easily the coldest and most uninvolving actress of the modern generation, wasn’t bad enough, the rest of the film is so badly paced and woodenly acted that I stopped caring before the adventure had even begun. With a lead actress so bad she should have played the lead in a Harry Potter movie, and an ending so cynically paving the way for a sequel, I left the cinema not knowing whether to be thankful it was over or furious that I’d been so brazenly mugged. The bears, at least, were cool.

The verdict: Beowulf rips the bear’s front arm off and rams it right up its ass with two minutes to go in the second round. Winner by knockout.

Well, it was supposed to be a quiet one, but by the time we’d dropped children off, picked children up, lunched with friends, unwrapped presents, quaffed, imbibed, hung out, yakked, cursed the heat and put batteries into all the toys, it was… pretty usual, really, despite the lack of Christmas decorations and the associated stress of balancing the requirements of an atheist, a returning Jehovah’s Witness, and a bunch of insane children.

And don’t you just hate it when you turn up at a party and some bitch is wearing the same dress as you? How about when you and your Bonus Son buy each other exactly the same present? Kudos to Lyn for keeping a straight face while Aiden and I swapped gifts: a house with two Face of Boe action figures is a house with two happy nerds indeed!

For the record, I received a biography of Dave Allen and a beautiful garden ornament from my sweetie, and ate more chocolate than any three premenstrual women I know.

What could be more cruisin’? Hanging out at the new (and beautiful) abode of Martin and Dr Izz along with good pals Shane and Angela, piles of pizza before us and nowt else to do but chat, drink, chow down, curse the memory of 2007 and talk up our chances of a successful year ahead. It was the perfect way to raise a middle digit to the year just gone, and remind ourselves that good friends are better than bad family, any day.

So what do you do when Number Wansan has bogged off to a party, you’ve got nothing to do until you head off to your own party, and the house is full of Number Toosan, Thrisan, and Wangul?

Bundle them in the car and run ‘em down to AQWA, where Erin can discover a new obsession with Leafy Seadragons (and why the hell not?), Connor can discover an intellectual equal in a performing seal, and the rest of us can attempt to take photos of fast moving fish with a camera that rates about whythefuckdidwebuythispieceofshit on the scale of goodness. 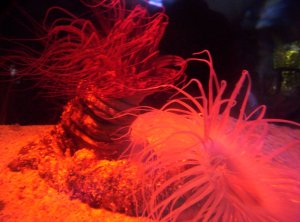 WE ARE THE WEREWOLF FAMILY!

A couple of months ago it was zombies, now my darling daughter wanders into the office and presents me with the texta-coloured expression of love below:

That’s right: we’re a family, and according to Erin, we’re werewolves.

Check it out! The first issue of new magazine Sci Phi Journal, with stories by the likes of Stephen Dedman, Geoffrey Maloney, and yours truly.

Each issue of Sci Phi will examine various philosophical ideas, using articles to present academic discussion, and stories to treat it in a fictional context. Issue #1 is based, broadly, on notions of Time and Immortality, and contains stories and articles by, apart from those mentioned above, Ben Goertzel and Stephan Vladimir Bugaj, Paul S. Jenkins, Ryan Nichols, Jason Pomerantz, Jason Rennie, Michael Spence, and Matt Wallace.

$7 gets you a bootful of podcasty action. You know you want it.