The program for this Sunday’s Mini-con at the Katharine Susannah Prichard Writer’s Centre has been released, and ’tis as follows:

4.00 pm Panel “How to get out of the Slushpile”: Lyn Battersby, Janet Blagg, Stephen Dedman; Alisa Krasnostein; Tehani Wessely followed by Q&A and wind-up.

That’s a pretty fair line-up, if you ask me, so come along and join in. Remember: don’t applaud, throw money.

Blakey-boy turned 14 on Sunday, a day that began with storms and high winds and the boys refusing to take a shower because the water wouldn’t get hot. Well, it was obvious, wasn’t it? The extremely windy weather had blown the pilot light out on our gas hot water system.
Which, indeed, it might have done. It probably didn’t, however, cause the scorch marks right up the side of the storage unit.
Shit.
But that would be a problem for another day (tomorrow, to be precise: thanks to the railway workers stop-work-coz-we-want-more-cushions-for-our-fat-arses meeting, I can’t get to work in any decent amount of time, so I’m off solar hot water system shopping instead). Because Sunday was Blakey-boy’s birthday! His 14th, to be exact, and apart from the traditional crack, whores, and shooting an unarmed man, he’d asked for a trip to the air museum to go with the Beowulf DVD and manga graphic novel he’d received.
You betcha 🙂
Adult girlies and kids under the age of 14 had either begged off or knew nothing about it, so we three Kings of boydom duly piled into the car and drove down to Bullcreek, where we spent 2 bloody happy hours comparing engines (that actually sounds faintly rude, doesn’t it?), debating the relative merits of air-cooled and water cooled biplane engines, and quite frankly, acting like big nerdy aeroplane boys, helped enormously by the museum having, in the time since our last visit, added a fully decked out Catalina flying boat to their already seriously bitching collection (including a Canberra bomber; Vampire fighter; two, count them two Spitfires, engines from all sorts of stuff including a B29, sundry parts from a B24, and the piece de resistance, one of only 2 complete Lancaster bombers in the country). 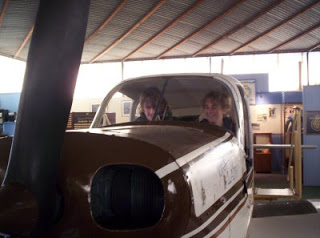 Mannn, if we get this thing working, the chicks we could pullll…….
The Catalina is, arguably, my favourite aircraft of all time (depending on whether or not I’m looking at a Tornado at the time, or remembering standing next to my new true love, the South Australian Air Museume’s shiny P38 Lightning, or thinking about the Wellington bomber. Or the A10…)
I have, on several occasions, informed Lyn of my desire to buy the half-completed hull currently in residence at the Albany Whaling Museum, float it off Rockingham jetty, and use it as a houseboat. I may or may not be channeling memories of Tales of The Gold Monkey when I make this threat. (Yeah, I know it was a Grumman Goose, but the point remains…)So I was only a touch over-enthusiastic and nerdy in circling it several times with my picture-taking finger on high alert 🙂 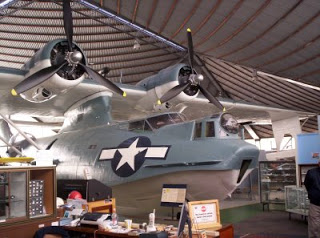 The World’s Most Beautiful Aircraft by Lee Battersby, aged 37 3/4

Anyway, if chatter and phot taking is any guide, the B-boy had a brilliant time, winning the Lancaster vs Catalina photo-taking lovefest by a count of 14 to 11. Next year, we may try to steal one. Just one. For the backyard.

No, this is the World’s Most Beautiful Aircraft, a Rebuttal by Blake Triffitt, aged 14 and 0 nothings

Ha! Bet nobody would blog this wacky self-portrait I took when no-one was looking…