I see your most recent Lyn The Luddite post, and raise you proper, decent, actually good music 🙂

Six or so weeks ago, Connor sees an ad for Lego on the telly and immediately enters into six year old Lego lust.

He has a basket of the big blocks, but he’s really outgrown them, and anyway, it’d be nice to get the kids something to stretch their imaginations. They’re both arty kids, I remember Lego with a massive amount of nostalgia, and it’d be great to have some for them to play with.

We hit the shops to price some up.

We have a mutual heart attack.

We ask around, to see if anybody has some they’d like to give away cheap/free.

Our good friend Sally has a box of it in the garage. Our friend Sue Ann points us in the direction of Bricklink.

Aiden remembers that he has disposable income. 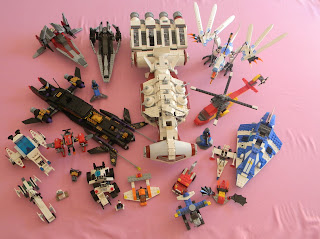 The big one in the middle is about a foot and a half long and has 1400 pieces.
And then there are the minifigs: 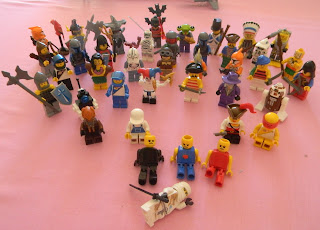 And that’s just the sets. That’s not counting the loose pieces, the blocks and plates and cones and weird wibbly bits that don’t build up into something.

And it doesn’t count the Atlantis set we have on layby. Or the T-6 shuttle Aiden went out yesterday and bought for himself after I took the photos.

I think I’m going to have to add a page to my website.

Lunch. Sizzler. Lyn and Aiden across from each other at the table, baby Luc in Lyn’s lap, laughing and giggling as Nanna does the Nanna thing. Everything’s cute and lovely and full of awwwwwwww.

AIDEN: You know what I love most about babies?
LYN: What?
AIDEN: They can’t pronounce the safe word.

I couldn’t see straight for about ten minutes.

The book with the creepiest little doll face cover ever is now ready to rock.

Go to Equilibrium Books to pick up your copy of Devil Dolls and Duplicates, which contains my story The Divergence Tree along with a host of other creepy and disturbing tales by some of the cream of Australian ickiness such as Chuck McKenzie, Jason Nahrung, Jay Caselberg, Kaaron Warren, Rick Kennett, Stephen Dedman and Sean Williams.

And really, don’t you just want to buy two copies and give one to your nanna? I mean, can’t you just see her face when she looks at this cover? can’t you? 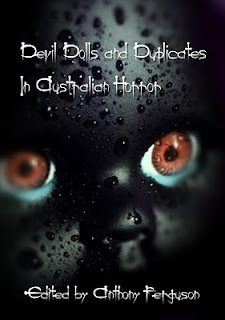