I meant to post in the wake of my guest speech at the KSP SF Awards a few weeks back, and commit to blog those thoughts I had spoken in person. I’ve got a few minutes. Let’s do it now.

For the last decade, I have been a writer. I’ve been writing a lot longer than that– my first publication was back in 1989– but for the last 10 years my writing has followed a discrete career arc, with ambitions and learnings completely separate to my day to day existence. I am a writer. I have never considered myself an author, and I delineate the difference thus: an author is one who publishes large works, and plays out their dramas as much in the public sphere as behind the desk– think Rowlinson, James Clavell, Stephen King; a writer simply writes, and works to create art, and tries to build good fortune along the way without utilising ones self as part of the message. It’s not a real solid definition, and it doesn’t imply a value judgement to one side or the other, and frankly, you could pick holes in it for fun any time you like. But it works in my mind. However, there’s one word in there that people seem to struggle with when I mention it in the same breath as writing, or speculative fiction, and that’s art.

I’m not going to argue the relative merits of SF as a genre. You like it or you don’t, and either is fine by me. I don’t even consider myself an SF writer: I’ve written poetry, plays, film scripts, stand-up comedy routines, jokes, reviews, interviews, articles, educational courses, and sundry other forms along with SF. So no, I’m not going to argue over whether SF is any more or less worthy than poetry or lichrachoor or dirty limericks. But I will argue that writing is as much capital-a Art as sculpture, or painting, and what’s more, I’ll even define what type of art it is:

Writing is abstract art, and I can prove it.

Take a look at this picture. 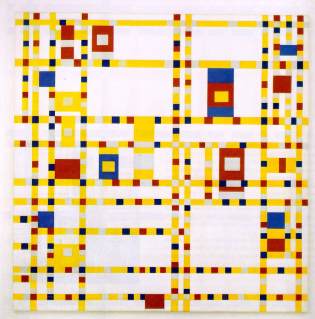 I’ll give a nice, yummy e-Freddo to anybody who can name this picture, without looking it up on the net, or asking an art historian friend.

Truth is, you cannot define this picture just by looking at it. It’s non-representational. It doesn’t look like anything, except for those subconscious links and images we ascribe to it from within our own experience. To you it might look like lit roads at night. To the person next to you it might resemble a micro-chip in action. That guy over there might see a cubist playing Pac-man. It’s abstract art, designed to push past the immediate emotional responses of representational recognition (“It’s a tree, I like trees, I have a nice memory associated with a tree, I am happy, I like this painting.”) and strike emotional triggers from deeper within the viewer’s subconsious.

And for the record, it’s Broadway Boogie Woogie, by Piet Mondrian. Have a Freddo.

How is all this related to writing? Like this:

Let’s pretend there are thirty of us in the room. If I hold up, say, a carrot:

Let’s all pretend this is real, shall we? 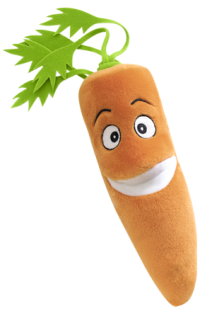 Again, whilst we aren’t viewing an actual carrot, we’re all looking at the same image, and the agreement that the image does, indeed, represent a carrot, would be implicit. However, let’s now take a look at the word itself:

The word ‘carrot’ only signifies the orange, conical, stick-tasting root vegetable in question because we, as writers and readers, engage in an unspoken compact that this is what that particular arrangement of letters signifies. The word itself, and the letters that make it up, hold no meaning whatsoever outside those which we agree upon. Should any individual member of our little cadre stand up and say “That word does not mean carrot. It means Nose-emancipator”, we have no moral right to tell them they are wrong, other than the fact that we have all agreed upon the word’s meaning.

Cut the word ‘carrot’ into its separate letters and place them in a different order, or distribute them throughout different words, and the word ‘carrot’ disappears. Hell, turn one letter upside down, and the word disappears.  An ‘arrcot’ is not orange, nor does it taste like a stick, even though it contains all the necessary letters. Unless we all agree upon it, and even then, we’d have to persuade everyone who speaks the language.

Meaning, agreed upon only because of the unwritten contract between artist and audience, eliciting an individual emotional response determined purely by the sum of experiences the viewer brings to the task of viewing the object. Abstract art, magnified by the fact that we, as writers, choose the order and weight we ascribe to each individual abstract element (Letter? Words? Punctuation? what are these things?)we use to create that emotional response.

How many of you, reading this post, heard my voice in your heads? How many heard your own?

Art is not comfort food. Art should never be comfort food. Great art does not reinforce that which we already hold to be true. It challenges the status quo. It undermines belief. It forces us to consider questions about ourself, and our perceived reality, and our place in the infrastructure of our society and culture, that we may never consider otherwise. Truly great art changes the viewer: the experience of viewing alters the audience, so that once the world is perceived in a particular way it can never be un-perceived. The audience, having come to this new state of mind, can never go back. The world is not the shape as it once was. The mind is not the same place it used to be.

Artists have a responsibility to change us because it is the nature of art to show us reality, not as we wish to close our eyes and see it, but as it could be, whether that be for good or bad. Artists look into the abyss and report back what they find. Writers are guerilla artists, because what we do is never representational: by the very nature of the art form it cannot be representational. It can only be aspirational, can only speak to those layers of emotion and reason that exist below the surface. Writers create new meaning with every choice of word, or phrase, or simile: love is not sex is not shagging is not rape is not ‘doing it’, and each time we choose one description over the other we steer reality in a new direction of our choosing.

Writing was the last of the classic art forms (writing, sculpture, theatre, music, painting) to directly reach the mass audience, and the first– and most brutally– to be suppressed, because its audience needs to be taught a set of skills simply to receive it and to form an emotional response, but once those skills are learned, and once that emotive response is formulated, it can never be removed. The mere act of reception forces intellectual and emotional advancement on the part of its audience in a way that other art forms are simply not designed to do. Writing is the only art form that inextricably ties intellect and emotion into the mere act of reception.

To be a writer is to force your way of thinking onto the world in a way which can never be undone. And that, to me, is the greatest aspiration towards which an artist may reach.

2 thoughts on “KISS MY ART, or, THE TREACHERY OF CARROTS”