Claire McKenna is a short story writer, Clarion South graduate, and a connoisseur of coffee houses (in which she an usually be found drinking tea), which is a change from our first few meetings, which invariably involved us both getting pissed as rats and acting in a very irresponsible manner– for those of you who have known me long enough, Claire is the one solely responsible for me wandering around a Con dressed in nothing but a pair of underpants and a bright orange ‘Pade’s Handmaiden’ costume. ‘Nuff said. She doesn’t write enough for my satisfaction, but when she does it’s always worth sitting up straight and paying attention. Her latest stores will come out in Cosmos next month and “Next” the upcoming CSFG anthology. 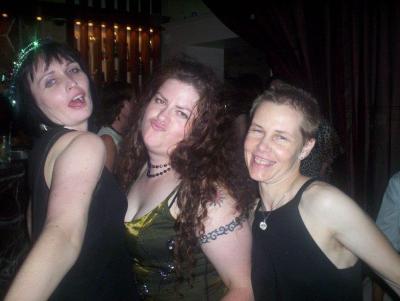 Claire in a Kim sandwich– with Kims Wilkins and Westwood.
You know what drives me crazy? Grammar.
Not other people’s, but the mistakes I make because I Should Know Better, but I don’t because I studied Biology in Uni, not English, Captain!
Things were better when I couldn’t write, when I didn’t know my dangling participle from my passive sentence construction, when the comma went where it damn well needed to go, and a sentence fragment could happily remain broken (there is a crack in everything, it’s how the light gets in, as Leonard Cohen says.)
But since I discovered Strunk and White, when I realised my high-school grasp of grammar and sentence construction wasn’t going to cut it with editors who clearly know a passive sentence (or to say passively, passive sentences are known by editors), and people give a shit about these things, my relationship with grammar has taken on the status of: “It’s Complicated”.
Since then, I’ve evolved a hatred of certain words, some more than others.
You know what word I hate now, what plagues me?
WAS.
Was, you are a bitch of a word.  Such a cock knocker of a word, so horrid that some modern dialects like AAVE have cast it out from their lexicons.
WAS can be useful for past tenses (That Was So Amazing)
But you know what else WAS likes?
Passive sentences.
Look, I don’t know exactly “how” to explain a passive sentence, or even to spot this creature in the wild. But by god, it exists!
It was. They were. He was running as fast as he could from the zombies.  He ran from the Zombies as fast as he could!  The weapon was loaded by him… He loaded his weapon.  I was given a bite by a Zombie. A fucking Zombie bit me! If WAS or associated criminals hang out in a sentence with –ING, there is a conspiracy, a plot going on. Those passive little fuckers just want to drag your work down.
You know what else shits me? TO BE.
There is an entire English Language variant called E-Prime that doesn’t allow for any variant of TO BE.
TO BE hangs out with SEEMS and SEEMED. Kind of like LIKE, but more in the style of I COULDN’T THINK OF AN APPROPRIATE DESCRIPTION AND I AM A HACK, FUCK IT. IT SEEMED TO BE AN ALIEN.
So now every time I read. self pubbed novels or very small press and cheaply edited-by-your-mate jobs I see the thing I struggle against. I’m a little jealous, frankly, there was once a time when two fucks were not given. (Or I couldn’t give two fucks. Oh you little passive turkey slapper!!).
LOLCats and teenage textspeakers rejoice! Grammar is dead, gone, kaput. A curse on English teachers and their devilish ilk. Possibly our first slightly-controversial (especially if you’re is a geek) selection for the year, but in the spirit of the day I proclaim Fuk YEZ! Youse rokks!
LOL.

One thought on “ROOM 102: CLAIRE MCKENNA”