Good news, everyone, in my best Professor Farnsworth voice!

Marching Dead is now *live* at the Angry Robot online bookstore. If you want a DRM-free epub bundle of sexiness in your wherever it is epub thingies go when you download them, get thee hence!

With less than two weeks to go until the official Marching Dead launch at Stefen’s Books (full details at the end), I’ve got two ongoing competitions at my Facebook author page:

Much like I did with The Corpse-Rat King, I’m running shout-outs every few days: simply ‘like’ my page, and when I call for responses, post a number between 17 and 369 (start of Chapter 2 to end of Chapter secondlastone). First one to respond gets an excerpt posted in their honour, and every respondent goes into the hat to win one of two copies of the e-book edition of Marching Dead.

I’ve created a bunch of book plates based on the brilliant cover art by Nick Castle, and I’m posting questions every couple of days. All you have to do is respond with the post that amuses me most highly, and a signed book plate will be dispatched immediately to your place of residence.

You want one of these babies, don’t you?

Currently, the question is: what book would have been vastly improved had the main character been killed before they undertook their quest?

And if you haven’t already written the details of the book launch into your calendar in fat, red crayon so that it can’t possibly be wiped off your iPad screen, here they are again:

Stefen’s Books
8 Shafto Lane, Perth
Saturday, 6 April: 2pm until it’s all over and we head across to the space reserved for us at The Generous Squire drinking establishment for discerning persons and get all drinky and folk-songy and dance on the table-topsy.

Another biffo review of Marching Dead has been posted over at Book Snobbery, all the more happifying as reviewer SJ announces herself enamoured after not quite loving The Corpse-Rat King as much as she’d hoped, especially noting some of the best fantasy worldbuilding I’ve ever encountered in a very long time… and tons of laughs, many of them of the uncomfortable variety. 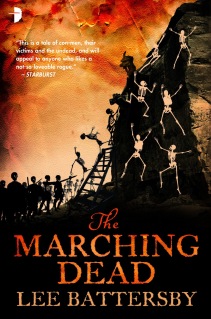 She also says she’d desperate for someone else to read the book so she has someone to discuss it with, so you’ll all be pleased to know that US/Canadian and e-book versions are released TOMORROW.

As Jesus said to the apostles at the first all-Jerusalem Ostrich wrestling championships, get on it, my darlings!

(This is one of my all-time favourite paintings: Reg Mombassa’s Skeleton trying to have sex with a fence (Skeletons have no eyes so it is easy for them to mistake a fence for a lady skeleton). It has nothing to do with Marching Dead, even though the book actually does feature skeleton sex. I just think it’s great. It’s reproduced here without any sort of permission from the artist on the assumption that he’ll forgive me because I think he’s so cool. If you’re still reading this, stop and go buy my book, dammit!)

It’s been a while since we’ve seen a Room 102 post. Seems everyone is happy with the world the way it is, thank you very much, what with all the fabulous religious and racial intolerance, James Corden TV appearances, peanut butter and water-boarding that we all love so much. Thankfully, the land of New Zulland is an angry one, and Angry Robot Books keeps bringing New Zullanders into the light and giving them a platform.

Which is my way of saying welcome, Freya Robertson, fantasy author and new Angry Robot stable mate. She has the stall down the back, where all the fresh hay goes. Freya is a lifelong fan of science fiction and fantasy, as well as a dedicated gamer. She has a deep and abiding fascination for the history and archaeology of the middle ages and spent many hours as a teenager writing out notecards detailing the battles of the Wars of the Roses, or moping around museums looking at ancient skeletons, bits of rusted iron and broken pots.She’s published over twenty romance novels under other pseudonyms and won prizes in fifteen short story and poetry competitions.

Freya tells me that “the glorious country of New Zealand Aotearoa is where the countryside is made to inspire fantasy writers and filmmakers, and where they brew the best coffee in the world.” Because we’re all familiar with those famous Kiwi coffee beans like arabuca… and yes, I probably am going to keep making those hilarious u-for-i jokes that Australians like to make about New Zullanders. You can always drop into Freya’s website or Facebook accounts to complain.
Freya’s Heartwood is a truly epic fantasy that tells the story of a dying land, a desperate quest, a love story of sorts, and the seven knights who travel the wilderness in a battle to save the land and its people. Heartwood will be published in early 2014, with the sequel to follow later in the year.

After all that, here’s what Angry Kiwi Robot Freya Robertson wishes to remove from your world:

Ginger. No, not the hair colour, the root. It’s hot, but it’s not. I mean, WTF? Chillies I can understand – you add them to hot food to make it hotter. But ginger? In cakes and biscuits? Hot spice in food that’s cold? I don’t think so.Oh…sorry Lee. You meant real dislikes. Things What Matter. That’s different.

Hubby wants me to nominate mobile phones. He’s a teacher and he thinks they’re the scourge of the modern world, having destroyed students’ eye contact and concentration. He’s equated them to the Black Death, which I think is a bit harsh. But, as I work at the same school, I do agree that text bullying is becoming a serious problem, and this links me in to the next topic.

I nominate Trolls. No, not the ones that get turned to stone. I mean the sort of people who stalk Twitter and Goodreads and other forums with the sole intention of making cruel, hurtful comments for the hell of it. Because of the anonymity of the Internet, they feel free to be as snidey and harsh as they want, and it’s the same with text bullying.

It’s a free country, they say. I’m entitled to my opinion. Well, no, not when your opinion’s shit. Or racist. Or sexist. Or just downright nasty. I don’t think anyone should say anything on the Internet that they wouldn’t say to the person’s face.

This includes people who leave spiteful reviews. Boy, do you need a thick skin as a writer. After twenty plus novels I’m starting to accept there is someone, somewhere, who already hates my books. You can’t please all the people all of the time—we all know that adage. And that’s fine; the world would be a boring place if we were all the same. But there’s not liking a book, and there’s writing a review condemning it to the fiery pits of hell. Apparently it’s cool to be snarky. Readers seem to love the review sites that tear books apart. And because of this, readers think it’s cool to be cruel when writing their own reviews.

If I like a book, I’ll give it 4 stars. If I love it, 5. If I hate it, think it’s badly written, poorly plotted or just dull, I don’t leave a review at all. Now, realistically, I know if everyone did that, the ratings would be up the creek. But the thing is, that writer took the time to get his or her eighty thousand words on paper. To find a publisher, or to make the effort to self-publish. They deserve respect for that. To leave a two-star review is one thing. But to rant on slating the book and pointing out what you hated about it—what does that serve? How does that help the next reader? The fact is that a book that you hate I might love, and vice versa, so knowing why you hate it doesn’t help me. Would you read that review to the writer’s face? No? Then don’t write it.
My husband supports an English football team. Recently, the CEO has received abuse on Twitter from “supporters” of the club over money spent on players. I’ve seen some of the Tweets and they’re pretty disturbing. Not just angry but personal and vitriolic. They think they can get away with it because nobody knows who they are, and that’s the worst kind of cowardice.


So there we are. I’m going to have to start ordering different meals at the local Chinese, but at least goats can cross bridges in complete safety.

If you’ve got a yen to remove some thing, concept or person from the Universe, and you think you can do it in a suitably witty, pithy way, drop me a line. My stage is your stage….

8 years married to the beautiful, talented, and generally all-round wonderful Luscious Lyn, and it only keeps getting better. Through monetary hardship, professional and personal disappointment, surgeries, illness, separations and worry we’ve carved out a life that brings us happiness, awards, successes, picnics, love, togetherness, and a life that leads us to lying in the bed together at the end of the day telling each other “That was a good day” many more times than not.

Love you, my darling.