In happier news, the Australian SF Snapshot series of interviews is being conducted again, and once again I have been snapped and shotted in what’s becoming increasingly like a 7-Up version of my again self.

This time, journalist Nick Evans has asked the questions, grilling me on the transition from adult novels to childrens works, my Australian TBR pile and just what the hell I think I’m doing with what’s supposed to be my career.

You can see my response here.

We lost another divine lunatic yesterday.

Robin Williams, who first helped melt my mind when I was a kid with his anarchic portrayal of Mork from Ork in Mork and Mindy, and who made regular incursions into my artistic consciousness through a series of brilliant live DVDs; early comedic movies like Moscow on the Hudson and Good Morning, Vietnam; mature middle-career performances in Jumanji, The Birdcage and others; and stunning dramatic tours-de-force in a range of intense dramatic roles such as Dead Poets Society; Good Will Hunting; One Hour Photo and Insomnia, killed himself.

For a man who had a profound impact upon my artistic, comedic and personal sensibilities, he was surprisingly young: he was only 63.

In many ways, Williams was an ever-present as I grew up. It’s hard to explain the impact of Mork and Mindy on my sensibilities: with a grand total of 3 TV channels to choose from and a much higher quota of Australian programming (not to mention viewing choices controlled by conservative, British parents), there was, quite literally, nothing on television quite like it. Mork was a force of nature, a fox in a chicken coop of cookie-cutter sitcom writing, and at a time when I was already glutting my imagination on science fiction and the Goon Show, I was an instant convert, a mini-Exidor running off at the mouth and driving my parents insane.

And, then, somehow he was always just there. Within a year or two we had purchased our first VHS player–at roughly the same time he was making the transition into movies, and if there was a Williams movie on the shelf, I watched it: Popeye, The World According to Garp, Moscow on the Hudson, Survivors, Club Paradise…. anyone who was surprised by his range and depth in later career movies should see these early films back to back. The depth was always there, the range always apparent. It was just the quality of production that altered, just the size of the marquee. Once I was old enough to travel the sixty kilometres to the nearest cinema by myself he became a staple of my cinema visits: Good Morning, Vietnam one of the first films I ever went to alone, without even the company of friends, the soundtrack to the movie a permanent fixture on my walkman (it still features on my iPod play list today).

When I took up stand-up comedy in the early nineties a group of comedic friends and I would gather together regularly to watch live videos and dissect them: Andy Kaufman; Richard Jeni; Steve Martin (another ever-present: when he dies, I’ll be just as distraught); Emo Philips, Richard Pryor, Billy Connolly…. the list was unending. Except Williams. Between us we had a mammoth collection, stretching right back to bootleg recordings of early Comedy Store appearances. Those, we just watched, and rolled around, in tears of laughter. Nobody wanted to dissect them. We knew we couldn’t learn anything, couldn’t replicate what he did in any way. We watched them because we wanted to see great art, and revel in genius.

And so I stopped thinking about him. He was furniture, as much as Billy Connolly and Steve Martin and the Goon Show and science fiction and Pink Floyd and my eyesight and hearing and all the things that are woven so deeply into my being that they are little more than autonomic processes. Always an awareness at the edge of my vision, occasionally popping into full view to stun me one more time– holy shit, the man did One Hour Photo, Death to Smoochy and Insomina in a single year— but more often than not just slightly in the background. Let’s be honest, he hadn’t starred in a decent movie since The Final Cut in 2004, and even that’s a flawed work. Supporting roles in Night at the Museum movies aside, it had been fairly slim pickings for a while.

But he was still there, part of my general awareness, a tightly-woven emblem in the pattern of my karass. I’d introduced him to my kids, through Jumanji and the Night at the Museum movies. We’d have gotten to Bicentennial Man soon enough, and Dead Poets Society in its turn.

I hadn’t really thought about his influence on my life, my ways of thinking, my approach to art, until I checked out my Facebook feed yesterday morning and was deluged by outpourings of shock and sorrow.

Now, I don’t know what else to say.

There’s a huge body of work, of various quality. There are artists who have been influenced, and will carry that influence into their own work. But Williams himself is gone, and my karass is wounded.

Mork has finally, irretrievably, signed off. 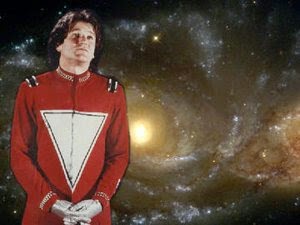