I’m running a new series of guest posts throughout 2015: Fetish Friday. Don’t get all sweaty in the pants—I’m going back to an older definition of the word, and asking artists to show us something that helps them with the ritual of creation, some part of their surroundings—physical or mental—that eases the path into the creative state, whether it be a location, a piece of music, person, picture, a doohickey, whatnot, curio or ornament without which the creative process would be a whole lot more difficult.


This week we finally get away from the writer types as I entice one of my oldest pals to join us. Please make welcome the utter chanteuse that is Katie Holland:

“But a caged bird stands on the grave of dreams
his shadow shouts on a nightmare scream
his wings are clipped and his feet are tied
so he opens his throat to sing.”
Maya Angelou

I hate to trot out the tired cliché of feeling trapped but that is precisely how I spent the first three decades of my existence. A perfect storm of poor life choices, unfulfilled dreams and mental illness came to a head in 2012 forcing me to make a decision: leave an unhappy marriage on my own two feet with some shred of sanity left, or leave it in a pine box. To avoid any confusion, the problem with the relationship was not a fundamental failing on behalf of the other party, it was my dawning realization that you can live the truth, or go bat-shit crazy trying to live a lie.

Birdcages may seem an odd choice of inspiration for a mild claustrophobe with a fear of enforced deprivation of liberty and general dislike of being restrained but there you have it. I love birdcages more than I love sequins (and as a half  European showgirl  I really love sequins). The birdcage motif adorned the house I purchased after the marriage, a sanctuary for myself and my children. An empty birdcage with an open door fills me with calm and peace, which when creating on a deadline enables the kind of focus that a working parent can sometimes find hard to muster.

There is a beauty and simplicity in the design. In my mind, I can enter the cage and still observe the world around me from relative safety. The open door means I can leave at any time.  Today the symbolism of the birdcage is alive and well in the house that I share with my current partner. Hanging outside, tucked in corners, peeking around door frames. To me they whisper ‘home’. 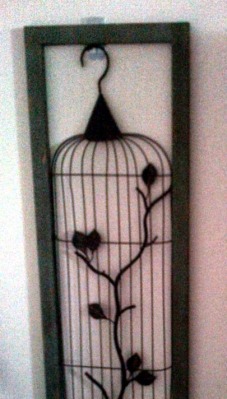 The bird still sings, but not for the dream of freedom. She lives the dream already. 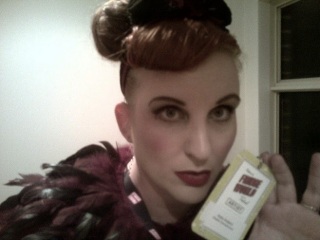 Katie Holland is a Perth based vocalist, musician, artist and occasional writer of amusing Facebook updates generally centred around “Who done a poo?” When she isn’t wrestling with the ubiquitous day job she performs with her 8 piece rock/soul/jazz/funk band “Random Act”, records as a session muso for anything from country to jazz to metal, gets her Burlesque on as saucy minx about town “Holly Hooray” and generally takes part in anything that will allow her to wear sequins, red lippy or PVC. Preferably all at the same time.
Katie lives with her partner, 3 mostly adorable though occasionally sociopathic children, and (in her dreams) a pet goat. Her partner won’t let her obtain said goat so this biog may shortly be amended to remove him, and substitute the goat. She isn’t addicted to white wine, Pepsi Max and crackers as she could give them up any time she wants to. She just doesn’t want to.
https://www.facebook.com/pages/Random-Act/144383388949787?fref=ts
https://www.facebook.com/sassysongstresshollyhooray?fref=ts

Are you a creative artist? Fancy joining in and letting us know about that special item, object, location or cosmic state of being at the heart of your creative process? There’s always room for another lunatic in the asylum: email me and make your most excited Horshack noise.