I’ve known and admired Adrian Bedford for nigh on a decade. One of the gentlest people I know, he’s made a career of taking readers into uncomfortable places, and then rewarding them with endings that give hope and uplift. A multiple Aurealis Award-winner, his latest work, Black Light, is a crossover crime novel that mixes supernatural fantasy with a taut, tightly-plotted thriller. His genuine humility is revealed by the fact that his website is named Little Known Author, and he seems to truly believe it.

A good friend, it’s a pleasure to have him reveal his soul for you here.

When I was fourteen, in 1977, my whole world changed. A work colleague of my dad gave me a box of books. In the box were about forty old, well-worn paperback science fiction books. This colleague of my Dad’s knew I was crazy about space and stuff (ever since the Apollo moon-landings), so thought I’d be the perfect recipient. There were a few dud one-offs that never did anything for me, and though I tried I couldn’t get to grips with any of the complete set of Edgar Rice Burroughs Mars books–but that left an Aladdin’s Cave of Wonders.

All of the Robert Heinlein juveniles, plus some of his others, up to and including Time Enough for Love, and I Will Fear No Evil. Loads of Clarke and Asimov. Of the Asimovs, I didn’t much care for his novels, but there was a short story collection, Asimov’s Mysteries, which featured sf stories that were also detective stories. I loved these, and read them to death. There was a Philip José Farmer time-travel novel that I gobbled up, too. 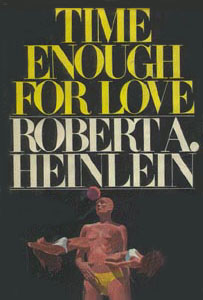 These books, more than anything except the moon-landings, made me the sf writer I went on to become. It was no coincidence that in that same year I decided I wanted to be a published science fiction writer, of novels. I’d been trying to write novels since I was about 11, but couldn’t figure it out and nobody would teach me. When I tried asking English teachers, they told me to work on short stories, and in any case to forget sf and write literary fiction. But my mind was filled with spaceships, robots and aliens, exotic worlds, and the piloted galaxies (!) of EE “Doc” Smith’s Skylark series (also in that amazing box, and which I read over a few days while sick in bed). It would be more than 30 years before I saw any point in literary fiction.

Those books were old when they came to me in 1977. I still have many of the Heinleins, just my favourites, such as The Moon is a Harsh Mistress, Have Spacesuit Will Travel, The Rolling Stones, Starship Troopers and Space Cadet. They are now so fragile, so careworn, that I dare not touch them. I’m also a little afraid to touch them for another reason: I suspect 2017 me would not find them so enchanting, so transporting. A couple of years ago I did reread a new copy of Spacesuit, which was, in places, gripping, but in others, the way the young male protagonist treats the young woman in his care is appalling.

Times have changed, and I have changed with them. I’m no longer so crazy about sf. I read more crime and literary fiction than anything else these days. I love classic literature. I don’t know if I’ve grown up or simply away from sf. But that box of books when I was 14 changed my whole life like nothing else, and those books are my real literary treasure.