Tabetha Rogers Beggs is Chair of the Katherine Susannah Prichard Writers Centre, where her boundless enthusiasm and personality goes a long way to giving the Centre the drive such places need to do more than simply hang on and survive. A writer herself, she’s wandered over a range of genres and forms, and details her journey at her website, Put It In Writing.

Here she takes us on a personal journey, and reveals her precious literary possession as having more dimensions than just literary ones.

When Lee invited me to contribute a piece to his ‘Literary Treasures’ feature, I didn’t need to think twice about which precious item it is I love about all others in my collection.

While it’s not in my nature to start on a depressing note, I feel this part of the story is integral to knowing, 100% this book and the man who wrote it, has influenced me more than any other in my pursuit of writing. The author is nobody you will have heard of, although his namesake is synonymous with many timeless classics, but his words hold the utmost sentimental value to me, because they are wise, witty and familiar.

When the Black Saturday fires hit Victoria in 2009, I was devastated by the black scar natures fury left on the Shire of Murrindindi. Only two years earlier, I’d visited those charming, historical areas, on some a sort of ‘find myself mission’. Etched on my memory from that trip, is Bruno Torf’s art and sculpture garden in the heart of Marysville. I hadn’t planned to go there, but on a whim I pulled into the car park. I met Bruno and his wife, who were so incredibly hospitable, by the time I left his gallery, I was compelled to hug him and thank him for bringing such beauty into the world.

So as I watched the news roll out in February 2009, my only thought was for Bruno and the art he had created, and I prayed at least some of it had survived the fire. 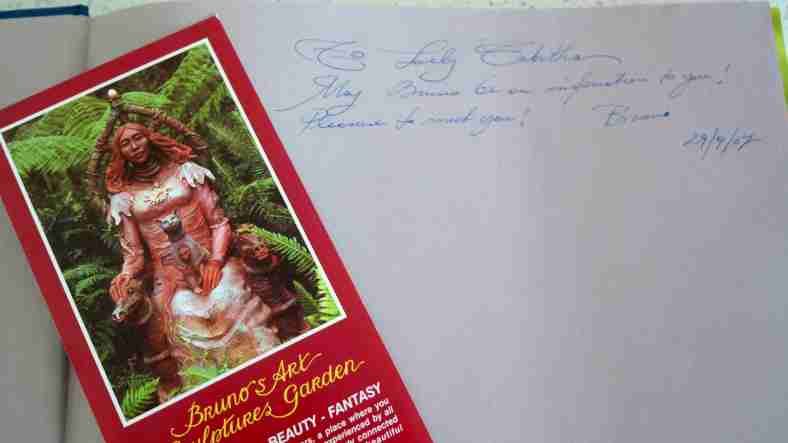 With that thought heavy on my heart, I wrote a list, of what I would save from the burning wreckage of my own home, should I ever be faced with such a disaster.

Of course my list assumed my children and husband were evacuated and out of harms way. But if I had only one chance to run back into the flames, what would I save?

At the top of my list was my laptop, since I never bother to back anything up and in the event that it melted down in the heat, I would most likely give up on writing, as I would never be able to write all those words again.

But, the next item on my list was Victor Hugo Brayne’s hand-written diary; my literary treasure.  Victor Hugo begins his journal in 1978 and chronicles his life over a twenty-year period. Victor Hugo Brayne is my grandfather, my Pop and I am the custodian of his book.

Perhaps it was gifted to me because out of all the grandchildren, I was the one who would ensure it was treasured, read and the stories passed on.

Heaven forbid any of my cousins ever read this article, as we all know we are not supposed to have favourites when it comes to family, but secretly knew I was his. Maybe it had something to do with spending more time with him and my Nanna than the others in our formative years, or because I was a wide-eyed child who believed everything he told me.

He could tell any story like it was a fairytale, whether it was about a battle on the front during WWII, or some funny thing that happened to him at the Senior Citizens Club.

Like the one he told me about the troll-like monsters living in a place called the Porongurups. It was only twenty years later, when driving east out of Albany, I was struck with revelation ‘Fuck me! The Porongurups are a real place.’ I often wonder how many other things were real that I thought he’d made up?

What is special about his journal, is while he wrote about the days events, something about that day would trigger a memory of the past.

Between the pages are stories of Great Uncle Shadrach, the last man hanged in Nuneaton, and an almost boastful sense of pride in the rogues and villains who colour our ancestry. Then he follows it all up with something so ordinary like my Aunty visiting that day and how proud he is to see his grandchildren doing well at sport or at school. There is no rhyme or reason to his formula. He just wrote how his brain played it out.

Through his words, I’ve discovered he was a feminist, with great respect and regard for women and their rights to be equally heard. Even as his illness overcame him in his late seventies, he always remembered that I worked for the City of Perth and would greet me with the question ‘Are you Lord Mayor yet?’ and I know he truly believed that one day I’d walk in and say ‘Yes. Pop I am.’

On some pages he includes footnotes, like the weather of the day or a short historical fact about a place or a person he’d written about.

It fits no textbook formula, or publishing guidelines, but to me it isn’t about that. It’s his handwriting, the backward slant of his longhand, his words that fell from his head to his hand, just as he thought them. No self-editing, or consideration for genre or narrative. Just a man and his memories. His thoughts of the day.

As Parkinson’s disease claimed his body, his daily words became paragraphs rather than chapters, his writing shaky, as the disease took hold. Eventually, no longer able to keep his pen steady enough for the page he stopped writing.

He left us on a warm February day in 2008 in a hospital room that overlooked the port of Fremantle, the very port that had welcomed the English immigrant and his Austrian wife to the land of opportunity fifty years earlier. A man with an adventurous soul and a heart not big enough for all the love within it.

But I have his book, twenty years of his words, and if my house were on fire, I would risk everything to save this most precious treasure.