A little while ago, I posted my alternative, all-female, Five for Friday Avengers line-up. It was carefully worked out, beautifully rationalised, and, you know, I’m ready and waiting, Marvel…….

Master 12, who is much more a DC fan than a Marvel fan, has demanded parity. So, utilising the same rules, (all females; secondary characters that are too cool to dispose of, but never seem to get any real primacy), and the same set of character definitions (A Tank, a General, a Conscience, a Street Warrior, and a Wildcard: check the original post for rationalisations.), here is my all-new, all-female, Justice League.

Okay, straight off I’m going to bend my self-imposed rule and include a character who has had her share of limelight moments, but is notable more for an unfortunate piece of costuming than any decent stories or characterisation she’s been given.

Power Girl is not just super-powered, she is Superman’s cousin from an alternative Universe. She’s Supergirl grown up, with the power set, the backstory, and all the potential that a female analog to the most powerful being on Earth should have. And yet, outside of a few brief highlights (The Harley Quinn team-up series, for example), and a long-running Justice Society of America alumnus (and let’s be honest, outside of geeks and nostalgists like me….) what we get is: boob window.

So let’s put her front and centre of the highest profile team in the company. Let’s treat her seriously. Let’s do her right.

Power Girl, by Kevin Maguire. With Huntress, and without the goddamn boob window.

One of my favourite comic book characters, and one I’ve always wanted to write, is The Question. A genuinely morally ambiguous character, sticking to the shadows, pulling hidden strings, always leaving the reader uncertain about his motivations and the longer game he seems to be playing…… For a while there, Batman supporting character Renee Montoya filled the role, adding shading as a morally suspect cop who had left the force and was tempted by the opportunity to operate outside of the law. It was promising stuff, so naturally it was retconned the hell out of her story when DC went through one of its regular pulling up of tree roots.

I’d like to bring her back, and leave the League dancing to the tune of a character they have to trust is on the side of the angels… 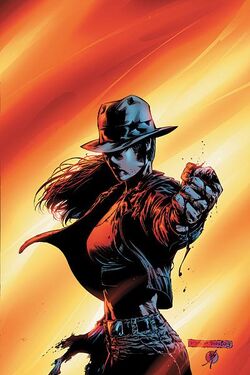 Two paranormal investigators. The two oldest characters in the DC pantheon. Fused together at the soul, torn apart, refused, killed separately and together until eventually, one chooses to rebuff a return to life in favour of staying in Hell to comfort those souls who live there because she knows the Universal truth that only angels are supposed to know: You can leave any time you want.

Give me open slather, and a six-issue run, and there’s no doubt in my mind that I would want to write Doctor Occult before any other character in the DC Universe. Give me the all-female Justice League, and the need to give it a conscience, and there’s no contest: it’s the immortal personification of love, the ego to Occult’s id. Rose Psychic.

It’s fair to say, I likes me a good psycho. Not the oooh-looks-at-me-I’m-so-cwaaaaaazeeee psycho of a Harley Quinn or Joker. I mean the I-will-cut-your-fucking-balls-off-with-my-fingernails psycho of a Mr Zsasz or Amanda Waller. So how about a young girl so obsessed with her monocular super-soldier father that she trains herself for umpteen years to think like him, act like him, and perform like him. And finishes it all off by tearing her own eye out so that she can look like him.

Another sordid, twisted, brilliant backstory that’s been retconned within an inch of its life over the last few years, but I think it’s time to bring back the Ravager that almost destroyed the Teen Titans, who filled the Dark Side Club deathmatch ring with abducted superteens, and dared to challenge the god Big Barda to a throwdown, don’t you?

In all of my reading of DC comics over the years, there is one character that has been wilder than all the others. One I would give your right arm to write (I’m not giving my arm. What am I, stupid?). One that sat astride my favourite books of loons (which I would give your left arm to write) and made even them look askance at her.

Crazy Jane of the Doom Patrol. Named for a painting by Richard Dadd, the famously criminally-insane artist. Burdened by 64 separate personalities, each of which has its own superpower, and only some of which are even remotely benign. Whose best friend is a sentient street that becomes a sentient planet that is destroyed and becomes a sentient brick. Who is supposedly cured, and stable, but come on, this is comics……

Oh yes, Crazy Jane. When you absolutely, positively, need a wildcard to fuck with the entire world.

So there you have it. Now Master 12 will talk to me again, and I can wait to see whether DC or Marvel call first. Our phones are standing by……