I turn 47 tomorrow. There’s no hiding it: I am well and truly middle-aged, and looking down the barrel of being old.

I’m worried about my future. I feel like I’ve not achieved the things I want to achieve in life, and with a mortgage, a family, and all the responsibilities that come with being a fat, middle-class, hairy man, many of those things are now, realistically, beyond me: I will never fly a fighter jet; I will never be a practicing paleontologist; there’s a very real chance I will never join G-Force.

I’m also worried that my achievements are all in the past. As I’ve aged, and responsibilities have multiplied, I’ve lost space and time for the selfishness that seems to be a requirement of the single-minded pursuit of excellence. It’s not like I come from a family of high achievers, either: I can’t think of single thing of lasting importance that the generations of my family before me have contributed to the world– and my Father’s side of the family has been traced back over 500 years, so you know, I’m not exactly riding the crest of a wave here. 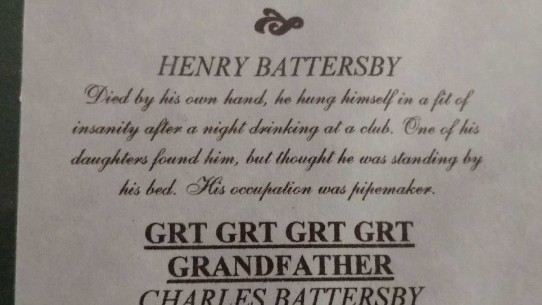 Seriously, this is about as good as it gets.

So, with this uncertainty accounted for, and with a determination to rail against the fortunes of withering capacity, it’s time to take stock and consider five things I’ve done that set me apart from centuries of familial mediocrity, and lay out a set of markers to keep me moving forward into my onrushing dotage.

Five for Friday: 47 Not Out

Five for the Highlight Reel

1. A Degree of Separation.

I come from working class stock. Both strings of my family are good, old-fashioned working-class folk. Higher learning, as I was informed in, literally, these words, “is not for people like us”. When my father left us in my early teens, he consigned us to genuine hardship. Even with ‘free’ education, I had to scratch and fight just to finish High School. To then spend three years studying an arts degree with no guaranteed job advantage at the end of it was, depending upon your point of view, an act of extreme self-interest or my first great statement of independence: I was not, no matter what, going to end up breaking my body and mind on the same shop floor as my father.

I spend my professional lives (I have two. Sue me: I’m greedy) surrounded by Masters and Doctors. A mere Graduate Diploma is nothing to these people. But in the context of what I escaped, and what I had to do to get out, this was my first real achievement in life.

I spent three years, in my early 20s, working as a stand up comedian. I wasn’t a great one: indeed, after developing a bad case of the yips in my final 6 months, I wasn’t even a good one. But, for a short while, I was a professional performer, pitting my words and talent against a room full of strangers for the right to choose what I ate that week. The lessons I learned– about brevity, about construction, about pacing and timing and how to work a crowd– have been invaluable in my professional career. I speak well in public. My writing carries the same voice I was developing. I can use a microphone, a stage, my voice, my presence. I can ad-lib. I can adapt. And I’ve been a practicing artist ever since: 25 years and counting since I first took to the stage.

3. Let Me Show You My Doodle

For a long time, it was a toss of the coin as to whether I was going to pursue writing or cartooning as my creative career. In my early days, I set out to do both, before my natural economic cowardice took over and I opted to settle into a day job and accept food instead of risk. My drawing skills weren’t brilliant in those pre-internet days, where the ability to create and foster your own ongoing webpage was not an option, and selling to magazines required a combination of drafting, writing, and drawing skills that could compete on the open market. But I was working on it, and I was improving: I sold a few, here and there, and it was definitely something I could have pursued.

I was partway through the first semester of a Design diploma when I met the woman who would become my first wife. And I faced a choice: I couldn’t manage a day job, a relationship, and two art careers. My writing was slightly more advanced: I dropped the cartooning. But, for a while, I was selling cartoons, and following in the footsteps of some of my artistic heroes. Readers of my Thumbnail Thursday series will know that I still have my sketches, and still value them. And with my upcoming change of circumstance, and the greater freedom to build an audience on the artist’s own merit that the internet affords, a return to developing my skills may just be on the cards.

I had my moments.

4. Take a Town and Change It

I’ve lived in Rockingham, on and off, since I was 8 years old. There’s something about this place. I’ve never lived anywhere that offers the same combination of beaches, cosmopolitan living, country lifestyle, accessibility to major conurbations (You can reach Perth, Fremantle, Bunbury, and the Darling Ranges all in under an hour), services, and recreation. It’s perfectly placed. The Rockingham Foreshore is the only North-facing beach south of Way Up North ™. Rates are reasonable. The City boundaries are 25 kilometres apart, North-South, and something like 15 kilometres West-East. There’s 37 kilometres of coastline, numerous islands and bays and beaches to suit everything from paddling toddlers to diving to sailing to hard-core surfing. I love this City. It’s part of my psyche, and part of my blood. I’ve moved away three or four times over the years– and I’m about to do so again– but I always come back.

And I may be about to leave a job that has soured on me, but I’ll do so knowing that, having been responsible for the installation of several pieces of public art among all the things I’ve done in the last 8 years, I have changed the physical nature of the City in a very real way. Public statuary comes with an expected lifespan– there are pieces I’ve placed in front of buildings that have been in constant use since I was a child that have lifespans that ensure they will outlive me.

Here’s one example. This is Safety Bay Library. It’s been a library since 1972, seven years before I arrived. But that sculpture in front of it has only been there for three years. 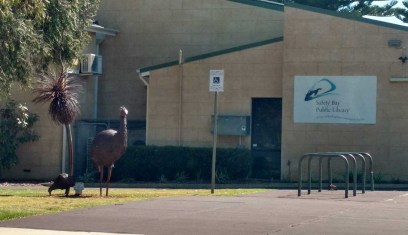 I visited this library when I was a child. There are children visiting it now who will never know it without the sculpture I’ve placed there. They’ll also never know I existed, but for the rest of their lives, when they picture the library, they’ll see the sculpture. I’ve changed the physical nature of that building for generations. It’s a small, secret egotism, but I love this city, and there are parts of it that will be forever changed because I was able to do this. That means something to me that I can’t yet articulate. But there it is.

5. The Writing of the Words Down on the Paper

Yeah, so it’s a bit obvious: let’s be honest, it’s the reason why most of us are here, reading all this self-indulgent nonsense. But the writing industry has done so much more for me than enable me to put out bits of paper with my name on them.

I met my beloved Luscious because of writing.

It’s taken me to two continents as well as Brisbane, Adelaide, Melbourne, the ACT and (oddly) Parramatta; made me innumerable friends (and critics and people who hate me: *waves*); been my ticket to festivals and conventions in four states.  I’ve been gifted original art works (and a jar of pickles). Been drunk while dressed in nothing more than a “Padme’s handmaiden” costume. Danced to a lone bagpiper in an underground LA carpark at 7 in the morning. Lost a shoe to the La Brea tar pits. Practiced forging the signature of a long-dead artist on a footpath with a twice-World Fantasy Award-winner. Launched the works of people I admire. Ridden a Dalek through the foyer of a museum.  Experienced camaraderie and collegiate friendship in a way I’ve never done anywhere else. Watched friends soar.

Writing has given me a world.

Future Five from the World of Tomorrow

Well, that’s the past taken care of. But I plan to be a long time dead (I don’t want to have to go through all this again) so here’s five things I want to do before the ghosts of future past claim me.

1. Learn to play a musical instrument

When I was a teenager, I scratched together enough money for a cheap guitar and some lessons. I’d managed a few simple songs (I remember one of them was Love Me Tender, but not what the others were). Then, one day I came home from school, and: no guitar! Turned out, my brother had overreached himself, and finally stolen something too big for me not to notice. My loss was his drug money. Kind of kicked the stuffing out of me, to be honest, and I never had the heart to pick the hobby back up.

I’ve always regretted that loss of heart, particularly as Master 12 has occasionally flirted with taking seriously the guitar he picked up at a garage sale some time back. It’s possible that the 18 Month Plan might have to accommodate some Father-Son finger picking.

There’s nothing terribly deep about this. I left England when I was five. I’ve never been back. I want to see Europe before I die. All those museums. All those famous landmarks. All that history.

3. Exhibit in an art exhibition

As mentioned above, I was just beginning to develop my visual art skills when Real Life ™ took me in a different direction. I’ve been playing with Lego (see what I did there?) as an art material for the last couple of years, and have exhibited at a couple of community Lego displays. I’m keen to see if I can marry my various visual interests together and exhibit in a general exhibition.

I’ve long been obsessed with determining my own destiny: a by-product, I think, of striving so hard to raise myself above a family history of willing servitude, as well as certain amount of leave-me-alone-ishness in my character. I have frequent bouts of desperate desire to get off the grid– to raise my own vegetables, herd wild solar panels, and knit my own yoghurt. With a decade of arts administration behind me, a couple of years away from the traditional work place, and the time and space to set up my own arts consultancy, this might be the put-up-or-shut-up moment I’ve been looking for.

And, ultimately, this is what it’s all about. Of all the things I’ve ever wanted to be– pilot, paleontologist, football player– being a full-time artist is the one that has burned most brightly, and for longest.

Writing, consulting, visual art, cartooning, my upcoming Patreon account…… it all adds up to one thing: to create, to contribute to the financial well-being of my family via my creations; to change the sum total of the Universe.

To be an artist would be a fine thing indeed.