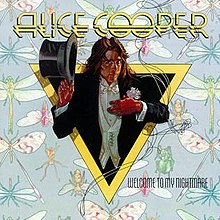 Music is meant to be so many things: joyous, heartbreaking, life-affirming, sad, happy, reflective, sensual…… nobody warned me that it could be so outright creepy.

From those first slithering bass notes (Doom doo-doo doo-doo dooooooommmmmmm, chING!), to Alice Cooper’s half-whispered, half-cajoling vocals, Welcome to My Nightmare slunk sideways into my life at a point where I was beginning to discover that, whatever life held for my peers, it was never going to be something I wanted to share. Seductive and damaged, it was simply like nothing I had ever heard before. No amount of ratings-friendly FM chockablockarocka hits could prepare my teen self for the musical creature that extended a cadaverous forearm from the shadows and beckoned closer… come closer…

I’ve spoken before about the bogan musical wasteland that Rockingham was during the 1980s. If it wasn’t draped in plaid and winnie blues, it was poofter music, and you were a poofter for listening to it. And poofters, which in Rockinghamese meant ‘anything we don’t understand or betrays the least difference’ were there to be beaten.

Alice Cooper confounded everything the surrounding wildlife held dear. By turns sensual and damning, gender-fluid and sexed-up, inviting and terrifying, his opus to a damaged soul wormed its way into my thinking and never left. Freed from the constraints of a band dynamic, and free to engage in the full theatrics that he’d been working towards for years (something I would learn about later, as interest turned to fandom turned to exploration), Welcome to My Nightmare was a perfect distillation of everything that could excite and transfix a boy desperately wanting to escape, but lacking the tools to do so.

It would be years before he was this visceral again, or so deeply cracked in his imagery and musical narrative– perhaps only Former Lee Warmer from 1983s underrated DaDa achieved the skin-tightening creepiness of tracks like the title song, and the deeply disturbing landscape of Years Ago and Steven (Oh, Jesus, that haunting, despairing cry: Steeeeeven! Steeeeeven!); and he wouldn’t release an album of such concentrated narrative power until 1994’s The Last Temptation. Here was something I could cling to, a rallying cry to the schism inside me that I didn’t yet have words to define: there are more like me, that don’t quite fit, that never feel comfortable, that would rather escape into damnation than succumb to emptiness. It is a flag I have stood beneath ever since.

It is, quite simply, a masterpiece: of musical narrative, of pop music, of the idea of the concept album. What it awoke in me, that desire to explore the joy that comes with walking wide-eyed into the shadows, has never left.

I’m listing ten albums that have influence me over twenty days. Click here to explore my thoughts on album number one, Pink Floyd’s The Wall.