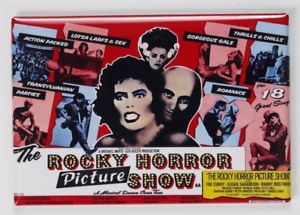 I’m going to give my Mum the benefit of the doubt: despite the blurb on the back of the video box, despite the pictures, despite the reputation, it’s entirely possible that when she brought this movie home as the very first we would watch on our very first VCR (a gift to ourselves to help cope with the departure of our Dad after a particularly messy separation fought out away from  our eyes with a startling lack of success), she had no idea what it was actually about.

Whatever. The truth is, The Rocky Horror Picture Show is a triumphantly anarchic mess. Part musical, part horror story, part twisted love letter to exactly the same 1950s Z-grade Rubber Suit Monster movies I hold so close to my heart, it is entirely a creature of excess. The Time Warp had been a radio and disco staple for my peers and I since primary school. That was not enough to prepare us for the triumphant entrance of Frank-N-Furter, and everything that followed I’m a Sweet Transvestite. The darker the movie became, the more Mum fell still and silent and disapproving, and the more I responded in exactly the opposite direction.

The seeds of an awful lot of my artistic… is fetishes the right word?… have their beginnings in this movie: the shock theatre (any wonder Alice Cooper entered my consciousness at roughly the same time); the combinations of joy/darkness/sensuality/outrage; the dualities; the sexualisation of fetishism and horror… as a young teen who was suddenly bereft of the father figure he was hoping would actually take a fatherly interest in him (My Dad: not one of those hey-buddy-wanna-toss-a-ball-and-learn-how-to-shave kinda guys), confirmation that the world was a nihilistic freak show where the main guiding rule was to seek out pleasure for its own rewards came at exactly the… well, choose right or wrong as your own personal feelings guide you.

Slowly but surely, I was departing from the paths that my school peers would follow. I was isolating myself: emotionally; culturally; and psychologically. There would be hard years to come, and I would be at University becfore it all began to pay off, but The Rocky Horror Picture Show was an important part of that beginning. There was an entire world out there– other worlds, even– where those things that were repressed and mocked in 1980s Rockingham were not only tolerated, but celebrated. It was a thought to hold onto as my school days became darker.

Seen thirty years later, it’s still a great romp with a fantastic soundtrack. The sexual and horror elements seem slightly twee now, compared to what I’ve seen in the intervening years, but somehow that only serves to add to its charm. It’s an unholy mess of a movie, every element thrown together with joyful abandon with no great care as to where they land. But by God, it’s a fun unholy mess, and one that gave me a life raft just as the water were begiining to rise.