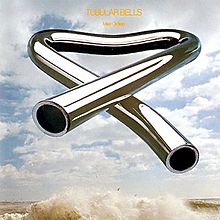 When I was young, music happened in three-minute bursts. It involved someone complaining about their love life, or lack of it, or death of it, or all three, over a frenetic bashing of drums. Guitars, and possibly keyboards, accompanied, unless Big Pig were on the radio, in which case MOAR DRUMS! And it all happened in between the false chockablockofstockcockrock bletherings of the smug twats who somehow got jobs at the local FM radio station.

Then I watched The Exorcist.

As well as being the single scariest goddamn thing I have ever seen, it featured some, frankly, creepy-as-fuck music that I needed to hear again. And lo, I was told that it came from an album by a would-you-believe-he-was-only-nineteen-when-he-did-it genius, and lo, my local music shop had a copy.

And that’s when I began to understand that music could be about immersion. That lyrics were an addition, not a given. That you could close your eyes, plant your headphones onto your ears, and sink into a journey. I have never quite engaged with ‘classical’ music. But here was music made within my zeitgeist, with instruments and arrangements that were recognisably of my time, that took the tenets of older musical forms and translated them into a form that was at once familiar and challenging to my barely-formed musical sensibility.

Tubular Bells is still the album I play when I want to lie back in the bath, eyes closed, and simply float away. It’s still the tether I tie my consciousness to when I need to rise above everything and see which way the winds of my unconscious are blowing. It’s my first journey, and my most meaningful. I have developed a deep and abiding love of the concept album over the years: Alice Cooper, David Bowie, Jeff Wayne, and countless others loom large in my musical karass. But this is the album around which they all circle, the one that most fully encapsulates that sense of narrative that I love, because it supplies the tools and I write the narrative, and that is still, thirty-five years later, the purest and most exhilarating of drugs.