Over ten days, I’m highlighting TV shows that have influenced my life and artistic principles. You can read previous entries here. Today, it’s the single best animated show of my childhood. 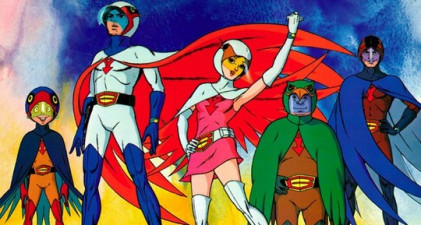 If you’re younger than your 40s, it’s hard to explain just how wretched ‘serious’ children’s cartoons were growing up. While the jokey variety got the full treatment, especially prime time Hanna Barbera shows like The Jetsons and The Flinstones, cartoons of a more dramatic bent were relegated to the margins.

For a start, they barely moved— more often than not, they consisted of a series of stills, usually against solid colour backdrops. Check out The Fantastic Four, Captain America, or Spiderman and Friends cartoons to see what I mean. They were crude, amateurish, and outside of the thrill of seeing my favourite superheroes, utter rubbish.

Until Battle of the Planets showed up. As an adult, I’m aware that it’s a rebadging of a supposedly superior anime. That 7-Zark-7, the computer comptroller and comedy relief, is an American insertion that should be burned and forgotten. And all the other yadda yaddas I don’t care about. But as a kid: this was like nothing I’d ever seen. Intensely dramatic, brilliantly animated, with real, identifiable people. Wild plots, amazing machines, a freaking transsexual character, fer Pete’s sake! (Not that I recognised that at the time, but like the best mindworms, it stuck, it made an impression, it helped normalise the concept in my pre-pubescent mind).

Later, there would be Starblazers, and the long road through Vampire Hunter D, Cowboy BeBop, Fullmetal Alchemist, Death Note, and all the other brilliant anime shows that I’ve discovered along the way. But this was the show that broke the world open for me, that showed me what animated TV could be, and left me with a lifelong desire to drive an F1 car with a gatling gun in the nose.

One thought on “TEN DAYS OF TV, DAY 6: BATTLE OF THE PLANETS”