I’m not saying it’s an addiction. I’m not. But I’ve just picked up my 250th Lego set, and what the hell: in the absence of any other form of life, I’ve decided to rebuild the lot of them. And while I’m at it, I may as well write a little review of each one.

There’s only one candidate to be the first. A set that’s made up of equal part awesomeness and joy……

There’s a popular phrase that I’ve often found particularly repugnant: “women of a certain age”. It’s a euphemism wrapped in a sneer. What it means is, women who don’t want you to know they’re older than they want to be. Of course, what it really means is women who should be old enough to know better than to act/dress/behave they way they do.

What it really, really, means is, I’m intimidated by women who don’t conform to my repressions, so stop pleasing yourself and get back inside my comfort zone, Aunt Ruth.

What’s that got to do with Lego?

Children of a certain age, by which I mean somewhere around mine, by which I mean people aged anywhere from their mid-40s to death who remember the late 1970s and still play with Lego, can be made to smile by using a 5-digit code. Don’t believe me? Try it:

When I was a kid, this set was the pride of my small collection. A whopping 80-odd pieces. Transparent yellow bits. Hinges. Slopes. A big engine. It was the freaking shizzle. And given how often my parents refused to buy me anything bigger because a) Lego was so expensive and b) it was just a toy and I’d grow out of it, (heh) I held onto it with a passion. Only one other set ever came close to the love I felt for this one, and I’ll get to that one somewhere down the line…

But what’s not to love? This set is the perfect encapsulation of everything wonderful about the innocence and ambition of youth. I mean, it’s a spaceship. With cupboard doors. And a steering wheel. And a spaceman who — and this can’t be said loudly enough — wears a helmet without a face piece. This is how eight year olds saw space when I was eight. This is perfect. 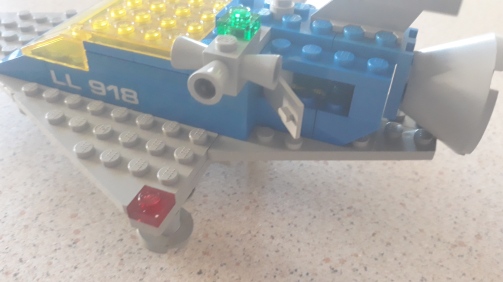 A steering wheel and a four-knob frontage re-purposed from a stove. That’s all you need.

Get with the plan, NASA.

When I was in my early twenties, I gave away my collection to a single mother colleague in a fit of largesse that I’ve always slightly regretted. When I came back to collecting as an adult, I looked up the prices of those old sets I had once had. And fainted. And cried a bit. And found a fellow AFOL who was selling a 918 when I was looking to pick up my 100th set.

It’s a long story short, but the collector was an arsehole who had a habit of ripping off fellow collectors (I found out later). He tried it on me until I chucked a very public shit-fit and shaming campaign within the local LUG: broken parts, missing parts, and threats & abuse when I complained…… but in the end, I got my set, and mostly in the condition I wanted. It took the gloss off the purchase. Buuuut a couple of years later, I have my LL918, I’ve moved on from both the LUG and the arsehole, and all this lovely little sets invokes is nostalgia, and happy memories, and a whole lot of childhood joy.

Close-up showing one of the damaged parts, but most importantly, that

But how is it to build?

Part of me wants to say it doesn’t matter. The mechanics of building it aren’t the point. But the truth is: it’s a genuinely enjoyable set. If I picked it up as a new original today, I’d be satisfied. It’s large, for only 81 pieces. There’s a gratifying range of different shapes and colours. There’s a nice ratio of blocks to flat pieces; the form builds up in rapid increments; it’s as solid as all get out: this is not one of those shatter-upon-impact-with-floor sets. Every piece has a defined purpose, which means you don’t end up wondering where all your pieces went as you look at the final product.

There’s a Lego concept called ‘swooshable’: how much does your set make you want to pick it up and swoosh it around the room like a kid playing with a toy aeroplane (or spaceship)? This set is eminently swooshable. It’s perfectly built for a little hand to grip its solid under-hull and run up and down the hallway making space noises. And, simply, it looks great.

Outside of the nostalgia, and the soft-focus childhood memories, LL918 is a genuinely great set. I have another in the series, the larger LL928, which I’ll get to later, and it, too, is thoroughly satisfying on all counts. Basically, this first ever series of space Lego– what is now referred to as Classic Space– was uniformly excellent.

For all we talk about building, and collecting, and creating, a large part of why we’re AFOLs is because Lego brings back memories of innocence and play. This little set, of so few pieces (not even in the largest 150 I own) brings me such happiness that I could build it again, and again, and again, and each time it would be nothing more than an utter, all-consuming joy. And this time, you’ll pry it out of my cold, dead hands……