The 2019 Festival of Trying to Rediscover a Regular Writing Habit While Finding Out How Many Lego Pieces I’ve Lost Over the Years continues! Today, it’s another recent set, the second of my Hidden Side acquisitions, 70420 Graveyard Mystery.

I discussed the ideas behind the Hidden Side theme in my review of the smaller JB’s Ghost Lab set earlier in this series. For me, the bells and whistles of the interactive element is immaterial (see what I did there?): I’m into sets for the building, the parts, and the look. And, eventually, how much I can reuse parts in MOCs. But for now, the focus is on the set itself. 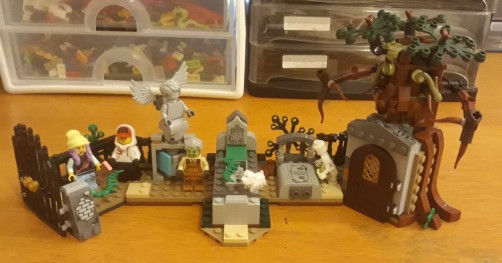 And a very good set it is.

Graveyard Mystery, like its stablemate, is an excellent set. Once again, it’s not a huge piece of kit, clocking in at just over 300 pieces. But once again, it’s a play set that is eminently playable. Although the piece count isn’t very high, it makes maximum use of every element. It’s big: laid out in such a way that it gives an impression of real size and allows access right across its width to a number of playable functions: there’s the grave that opens and closes; the stone angel that rotates to reveal hidden secrets; and then there’s that GIANT CREEPY ANIMATED HELL-TREE AT THE FAR END WITH ITS CHANGING EXPRESSION OF HATE AND GIANT CREEPY DEATH CLAWS REACHING OUT TO GIVE YOUR SOUL THE NIGHT TERRORS, I MEAN WTAF, LEGO?! 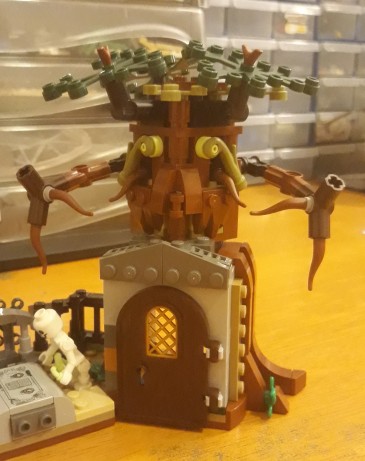 Yeah, sleep well tonight, innocent kid who probably got this set for Christmas from some well-meaning single Aunt and who’ll now need therapy just to go to the park. W.T.A.A.A.F. Lego?

The construction is satisfying, taking place over three separate mini-builds that connect together. Each one adds both size and complexity to the final display: this is a build that seems perfectly paced as well as placed.

It does have one weakness, however. The outer two elements are connected to the central section by a single flimsy joint: moving it is an exercise in being vewwy vewwwwwwy careful. I moved it from my table to a bookshelf five steps away– it started in one piece, and ended in three over the course of maybe four steps.

Expansive, full of features, but as fragile as a newborn baby’s skull. Don’t juggle it. Or, you know, the baby, either.

That aside, this is a set that ticks all the boxes. It’s fun to build, looks great, is highly distinctive, and has a bunch of cure playable features. Plus THAT TREE. If the connections between the three sections had been stronger, I’d have given it top marks. As it is, it’s still very, very good. The Hidden Side theme is looking like it’s going to be one of the best things Lego has produced in quite a long while.

Fun, playable, and looks good. I just wish it was a little sturdier.