Time for one of the truly odd moments in our  250 Lego Reviews journey. When Lego do dinosaurs well, they do them really well. (Just wait for my review of the Creator dinosaur down the track: a set so good, I bought two.) When it does them oddly… well, you get 6721 Mosasaurus, and I still don’t know what to make of it.

Let’s start with the cool. 6721 Mosasaurus contains 26 pieces, and you can make four different dinosaurs out of it. That’s flexibility by anybody’s definition. It originally set you back a cool ten bucks, which sounds a lot for such few pieces until you see what they’re going for now on Bricklink: it’ll set you back roughly holyshithowmuch?, even for a second-hand set with most of the pieces missing. This set is, and who knows why, oddly treasured.

Actually, it’s easy to see why the mosasaurus part of the set is treasured. It actually looks cool, despite the vast majority of parts being giant, single-use molds, and the fins being clearly too comically teensy-tiny for the body. Although, to be honest, if you’re making a mosasaurus, who’s thinking about making anything else, amirite? There’s even some clever parts usage: the tongue is a red crocodile head turned upside down, and the top of the box doubles as a display stand, so extra points right there for cleverness.

The mosasaurus in its natural habitat: the top… of a… plastic box……

Here’s where the ‘oddly’ part of the equation comes in. Because the set contains a selection of alternative parts that enable you to turn your mosasaurus into three other dinosaurs– an iguanodon, postosuchus, or dimetrodon– really, really badly. 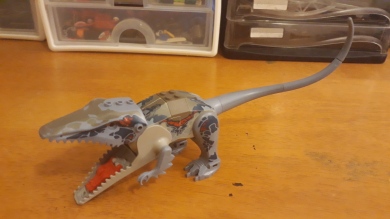 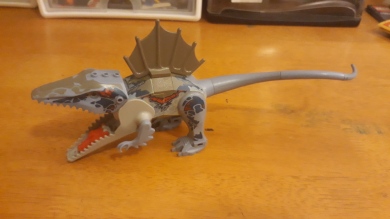 From top L, clockwise: the mosasaurus, iguanadon, dimetrodon, and postosuchus. Those alternative parts are… I mean… just look at that iguanadon head… I mean… come on…

I have absolutely no idea how I would ever use this set in a MOC that was anything other than it’s-a-dinosaur-setting-and-in-the-middle-they-come-across-a-mosasaurus. But it can’t be denied that the default setting for this set makes me want to build exactly that. There’s a weird charm about it. The alternative builds are trash fires of muppet-resembling awfulness, but that mosasaurus is a solid enough build to win some points.

There are three other dinosaur sets in this series: a T-Rex, styrachosaurus, and brachiosaurus, and every time I pull it out, I’m tempted to check out the price for the others. Thankfully, I do, and then the urge goes away.

But for now, my teensy-finned killing machine sits comfortably amongst the legions of spaceships, haunted buildings, and more spaceships that this review series is showing me as being addicted to.

The mosasaurus gives it cred that the muppet-heads can’t quite brush away.