Okay, so let’s see. We have two of the most iconic super-characters in comics history. One is known for getting around by swinging along on a series of sticky vines he shoots from his wrists. The other has a glider that is so iconic it’s named after him and is the actual climactic centrepiece of the first modern Holy-shit-how-fucking-creepy-can-one-Willem-Dafoe-get? Spiderman movie before they became soppy teen romcom borefests around Europe Holiday Vacation glee club whatever the hell that last one was supposed to be cinemax moneyhoovers.

So, yeah. Put them in cars. Worked for dinky cars in the 70s, amirite? 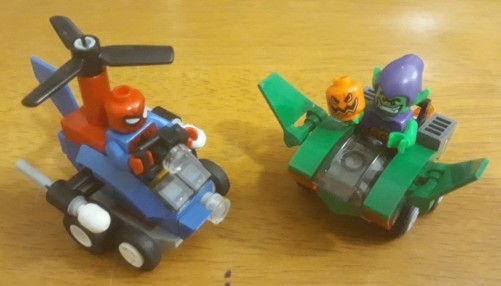 What. The fuck. Are these. Supposed. To be?

Which would, okay, be a sort of cheesy piece of fun if that was where the whole idea stopped. But this is the rot-in-Room-101-for-all-eternity badness of Mighty Micros, a theme so… whyyyyyy?… that this review may be the only hint alien archaeologists of the future ever get that it existed at all.

In the first place, who is this for? Spidey fans? Small children? People who watch Into the Spiderverse and think “It’s good and all, but it would be so much better if the characters had stunted half-legs and drove around in wobbly, ugly vehicles that are so badly weighted they fall over the moment the character gets out”?

Why does a guy who shoots things from his wrist need missiles? You know, in that slightly iconic, slightly filled with tall buildings full of people place he operates in that we like to call New York? On his heli…car…thing… what the fuck is it anyway? Apart from ugly as a bucket of arseholes? While he fights the Green Trick or Treater in his Gobjetcar…do those wings flap? Why are they backwards? I don’t….

No, really. WHAT. THE FUCK. ARE THESE. SUPPOSED. TO BEEEE?

Look. They’re ugly as sin. They’re made up of tiny parts that will just make your small person cry with frustration. They won’t look good on your shelf. Who wants to play with them when they’re the same size as an actual dinky car and only three times as expensive? Who even thought this was a good idea? Who did they think would go for them? Are they receiving treatment for their addictions?

Mighty Micros were stupid. These are stupid.

That pumpkin bomb will look good in a far corner of some Halloween MOC one day. 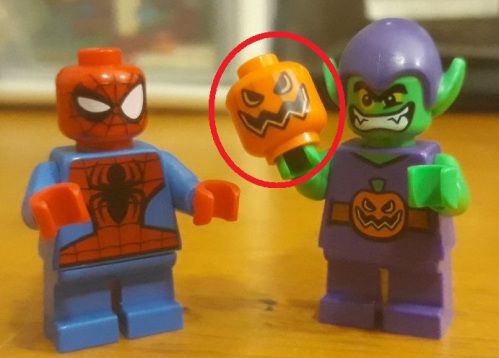 That’s it. That’s the one part in 78 that is allowed to survive the apocalypse.

There. I found a positive. Happy?

This set sucks in every way. Every. Way. Die, Mighty Micros. Die.

I need a lie-down.

Spidermidget vs the Green Hobbit in a race to see who can topple over their worst vehicle first? Did someone keep their job after this?