One thing I realised last year: I’m reading a lot of graphic novels these days. I always have, but for reasons of digestibility, time, and interest, I’m smashing through them over the last year or two. Sixteen days into 2020, I’ve read six, so I thought it might be fun to post a paragraph or two each time I get through another five.

Naturally, to start with, I’m going to do six. Because that’s how I roll. Badly.

So, to recap a little bit of recent history: just before Christmas, our darling girl Erin moved out of home. Not, like most teenagers, to a share house in the reasonable vicinity. Rather, having received her University offer, she absconded 1500km back to Perth to the spare bedroom at her brother and sister-in-law’s place one street away from the University at which she will be studying. I know: selfish, right?

So there was sadness, and parting, and missing her like crazy people, and sadness. Because not only was she leaving our home, she was leaving the country, at least for a couple of weeks– the three of them had organised a holiday in Malaysia before the school year started. Which was fine. At least, until they got to the airport and she couldn’t fly because of a timing irregularity with her passport. So Aiden and Rachel flew out without her, and Mission Get Erin On a New Flight started. Which we could have done over the phone and internet, except for one small issue: the mature, grown-up young adult who had absolutely made sure she had everything when she moved out had left her original birth certificate behind, and she couldn’t get a new passport without it.

Also, we had exactly enough money in our account for the cheapest flight to Perth, so Luscious took executive charge and I was on that flight about three hours after everything went skaplooey.

It was all sorted out, eventually, and Erin managed to link up with her travelling family three days later. But that short gap did give me a chance to hit the only thing in Perth Luscious and I really miss (apart from some friends) — bookshops — to the point that the one piece of hand luggage I brought with me ended up weighing more than Erin’s actual luggage.

Including a swag of graphic novels, because if you think it’s hard getting books in Karratha, you should try being a comic book fan……

To whit, I’ve been on the read since I returned, and here are the first five-but-actually-six-but-five mini-reviews.

If you need any more proof that comic books are bugfuck crazy: Devil Dinosaur is an actual, common or garden T-Rex with latent psi powers. Moonboy is his evolved Australopethican friend/guardian/pet. They fight aggressive killer Neanderthal types in ancient prehistory. Only now those Neanderthal types have opened up a portal to the modern day, Moonboy is (apparently) dead, DD has followed a tribe of killers through to New York and teamed up with Moongirl, who is a nine year old genius obsessed with the idea that she is infected with Inhuman DNA and might be turned into an alien/mutant/Neanderthal/superhuman of unknown looks and powers at any minute. Got it?

Also, this is an utterly delightful book in every way possible. Marvel has developed a brilliant line of female-led comic books in recent years, tapping into the same rich vein of teen-outsider-angst that has made Spiderman so popular over the years: if you haven’t caught Ms Marvel or Squirrel Girl, you’ve missed some of the best spandex storytelling around. And Moon Girl and Devil Dinosaur is just as good. It’s an utter treat, and I’m getting more as soon as the next round of spare comic book buying money becomes available.

So there are dinosaurs, and there are other dinosaurs only with tools and face paint that are never explained, and there are aliens that land and start to harvest and/or fight one lot or the other, but none of it is entirely clear because the story telling is muddled, the art emphasises ZAPPOWBLAM over clarity at every possible moment, and Morrison’s starter-for-ten trick of throwing a million mysteries at the page and never explaining anything until the complaints letters are thick enough to swim through is utterly out of control. An unholy mess of who cares? proportions.

DC has rebooted its characters so often it’s honestly a surprise that any of them even remotely resemble anything you remember about them. One of the worst victims of this is Huntress, a character who never quite seems to fit into anybody’s gallery no matter how many times they try to find a Bat-niche into which she can be wedged. This is, actually, one of the better attempts: this time she’s Helena Wayne, an alternative Universe Robin, and daughter of Bruce Wayne and Selina Kyle. Transported to our Universe with Supergirl Kara Zor-L, they take on the mantles of Huntress and Power Girl while they try to work out how to get home.

In this issue, PG’s powers are raging out of control, and Helena is forced to take the step I assume they’ve been avoiding for three volumes (this is the first I’ve picked up)– contacting the Batman and Superman neither woman can quite bring themselves to believe in for help. It’s a fantastic set of storytelling conceits. I just wish they had been allowed to play out instead of being tied to bog-standard DC superhero thud-and-blunder. You could write the plot out in the dark, without me needing to tell you: it’s the usual team-up crossed-wires and crossed partnerships caper. Readable, enjoyable, but the truly fascinating setup deserves far better.

I’ve always liked Mark Waid. He’s a comic book fan’s comic book writer, bringing new wrinkles to beloved characters and writing storylines that are entertaining and satisfying in equal measure. I’ve got a bunch of his stuff, and his name on a title always catches my attention.

I’ve always liked Daredevil, without necessarily being inspired to collect an ongoing title or substantial collection of GNs. This is a collection of, essentially, one-shots that team Horn Head up with his childhood bully, the Silver Surfer, and the Incredible Hulk. And each one works beautifully, bringing into stark relief different aspects of DD/Matt Murdock’s personality and duties to give a fantastically rounded and satisfying glimpse into the life of a street-level hero who needs a day job to survive, and who is struggling to make either work by simple dint of the fact he’s been outed in the press and everybody believes it. This is the sort of thing that Marvel does well: part fantasy, part personal drama. I’ve always liked DD, and I’ve always liked Mark Waid. I could handle picking up a few more of this run. 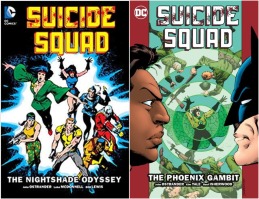 I am an unabashed fan of the Suicide Squad. Having caught up with everything the New 52, New SS, Rebirth, movie, and all other recent reboots can offer, I’m slowly trawling comic shops, Book Depository, and homeless shelters to regather the works that brought me to the franchise. Short version: these are mad, cynical, uproarious smashfests that are by turn funny, OTT, and deeply involving.

The key is that Ostrander treats his melange of C and D-grade characters as real people. You get behind them while never losing the fact that life as a villain is, ultimately, a farcical way to live your life. Travelling to an alternative dimension to save a demon-possessed sibling? Of course. Starting a revolution using a paranoid Royal supervillain with a Christ complex, then using that same villain to defeat the revolution by defeating the Russian secret superhero team that has been sent to prevent the same revolution? All in a senseless, suicidal day’s work, and what’s more, they know it. What can I say? It’s just about my favourite ongoing series, and I loves it with much loves.

3 thoughts on “FROM MOONGIRL TO BOOMERBUTT: MINI-REVIEWS OF FIVE GRAPHIC NOVELS”