Fly me to the mooooon, with another Lego 250 reviewwwwwwww. Yes, it’s been a while, and I’m going to have to mark double time if I want to get through these reviews by the end of the year. So let’s jump straight to one of the biggies: the eighth largest set in my collection, and second largest one I’ve reviewed so far (and let’s hope it goes better than the Rex’s Rexplorer review….), 60229 Rocket Assembly and Transport.

Last time we crossed paths with the recent NASA-themed sets, I enthused all over the place about the smallest set in the series, the 79-piece Satellite Service Mission. Tiny but terrific was the verdict. Rocket Assembly and Transport is a whole bunch of things, but tiny is not one of them.

For a start, it clocks in at over 1000 pieces. For another, those 1000+ pieces are spread over seven separate builds, along with seven minifigs. For another another , the rocket itself is not only big, it’s… well… check this out:

And it’s not like that’s a small head, either……

It’s not only the flagship set for this theme, it feels like it. The monster rocket is lugged around by its own giant flatbed crawler.

With a lava lamp for scale. Yes, I like lava lamps. YOU DON’T GET TO JUDGE ME! YOU’RE NOT MY REAL MUM!

Even then, there is a (admittedly, slightly flimsy) gantry that goes over the whole shebang, as well as three other components that would make reasonable third-tier sets in their own right. 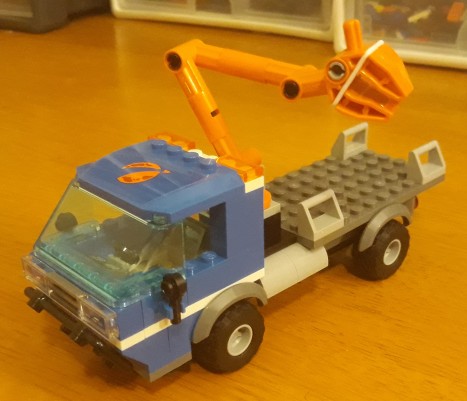 The truck is a nice little build without being anything extraordinary. The highlight here, apart from enough blue in the colour scheme to drop it into a Classic Space diorama without too much fiddling, is the claw arm, which adds an unusual aspect of playability compared to other sets. Either way, it fits nicely into either a Space or City lineup without any tweaks, which is nice flexibility. 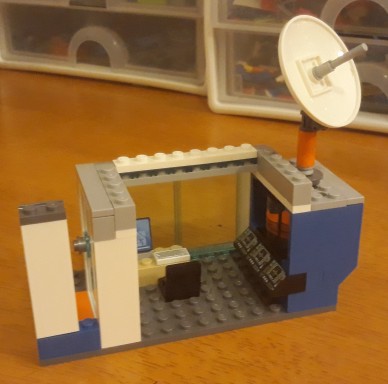 The control room is reminiscent of similar Classic Space modules, and once again throws enough blue into the colour scheme to drive the comparison home– I refuse to believe it’s not a deliberate tactic, especially when you see that bank of computer slopes against the wall. It’s open on one side, giving little fingers easy to access to move minifigs around. It’s a simple design– dare I say almost classic — and only enhances the playability of the whole set.

And that’s before we get to, arguably, the other jewel in this set: the workshop and rover. It’s hard to over-emphasise just how good this rover is: it’s tiny, just a few pieces, but every one is perfectly placed to feel like you’re rolling around a teensy little Mars vehicle. The use of hinges and joints means that it’s by no means a static dinky car– the drill can be extended in a number of directions, the lights can be swivelled, and it’s unbelievably playable for something that clocks in at less than 30 pieces. 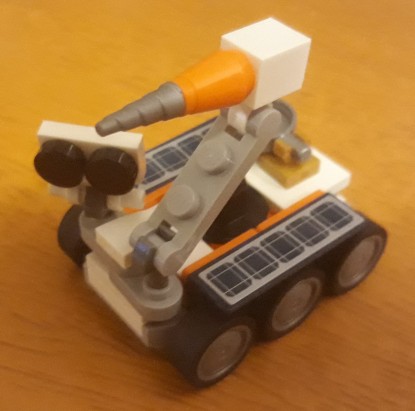 The workshop building maintains that standard. Playability is the key here: the doors roll open and closed, the gantry shelf can be raised and lowered to enable minifigs to get underneath vehicles parked upon it, and there is a rack of distinctive tools that can be held and used like the little toys they actually are. It’s a component designed to encourage all the neeyoooows and brrrrrttts of a child’s imaginary workshop. 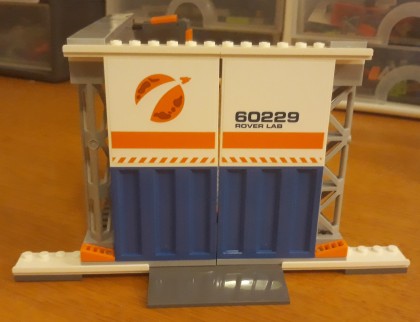 Two views of the workshop, showing the closed and open doors, as well as the wealth of playable features.

Put them together, and they’d make a nice little set in their own right.

Add all these nifty sub-builds to the massive, massive (did I mention massive) rocket and truck and you end up with an incredibly playable set of serious size. There are quibbles: the gantry is a little fragile and wobbly, and some smaller pieces across the gantry and workshop builds don’t adhere quite as well as you’d like, resulting in ongoing surgery as you play/display. The main build is enormous, but it’s made from huge pieces and is somewhat repetitive, so it doesn’t result in a lovebuild the way, say, the Haunted House or An Unexpected Gathering sets do (and we shall discuss them later). But when you see the whole set built, and placed together, and ready to play/display, there’s a great deal of satisfaction and sense of phwoar that is the result of a very, very good build indeed.

The whole kit and kaboodle. almost– missing only the workshop for reasons I can’t remember. Impressive in scale and playability.

Big, bulky, with oodles of playability and several component builds. A bit stronger and this would be a minor classic.