Not this guy, but another Lego 250 review! This time, we hit the briny depths with an initial glimpse of one of the coolest themes outside of space: Atlantis.

Look, I know I bash on about the human-centric closet racism of Lego sets in what seems like every damn review. So let’s not go on about it anymore, okay?

So. Atlantis is a theme that was directly designed by Lego in collaboration with groups of child psychologists and, most importantly (and in a new move, at the time) boys. Exclusively boys. It was 2009, not the modern day, jeez! And it wasn’t at all racist.

However, it did involve a team of heroic humans heading off to the bottom of the ocean to uncover the mysteries of Atlantis and recover its treasures, opposed only by a tribe of evil mutant fish-beings. Thankfully, this was done in a way that totally focuses on the fun, play aspects of exploration and archaeology, and was therefore fun and play, so everything’s all good here.

What the theme does have going for it is some of the most brilliant and enjoyable designs I’ve ever come across. There were nineteen sets in total: I came into collecting just as the theme was being mothballed, and managed to grab six before they entered the realms of Bricklink flippers. (Ha! Flippers! See what I did there?…… Suit yourself.) Seabed Strider is the second-smallest of the sets I have, but it demonstrates all that is good about the theme as a whole.

For a start, there’s the colour scheme. I’m a big fan of a unified colour palette, and the predominantly red-on-grey look works beautifully. 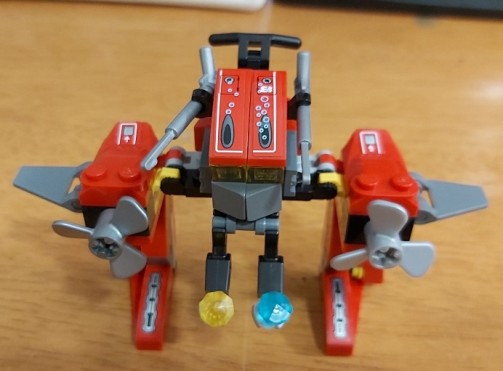 It’s a harpoon, okay. And they’re made from softer plastic, so they do get a bit, you know, bendy. Bendy harpoons. It’s a design flaw, okay? It only gets a ‘good’ for a reason, okay?

The design is compact and solid: the set is a lightweight at 95 pieces, but each one adds to the overall design rather than sacrificing aesthetics for structure or vice-versa. And there is still playability: the clever incorporating of hinge elements means the set can be converted from ‘strider’ to ‘swimmer’, giving this underwater set an element of swooshability that is always welcome in any set. (Okay, maybe not the Taj Mahal, but every other set…)

More artificial assistance than a Chinese Olympic swimmer, but at least it looks good.

And then there are the minifigs. No matter how brilliant the designs are in the Atlantis theme — and most of them are — the minifigs are out of this world. The diver minifig is fairly bog standard, although the giant, one-piece helmet was new to me at the time. But the Hammerhead Guardian (I was right now old when I learned it’s called that, thanks Brickset) is just absolutely stunning. I’ve raved about a few minifig series, but the Atlantis fish people are as beautiful as they get.

YES, THAT IS ONE HELL OF A SEXY TINY PLASTIC FISH PERSON. THERE, I SAID IT. ARE YOU HAPPY, DORIS? ARE YOU?

Seabed Strider is a set that does exactly what you want a small set to do: it introduces the elements of the wider theme; has plenty of playability; provides a gorgeous minifig; and definitely leads the recipient towards wanting more sets. It’s not a world-beater — those come later, with higher part counts — but it’s a good, solid set in every way.

The standard Western human targets his multi-million dollar piece of high-tech machinery towards removing the… what is that, anyway? A small sign on two bits of rock? How much is that going to be worth, exactly?… from the obviously non-Western native who tries to defend it using only an obsolete piece of pointed-stick technology in no analogy for anything I can think of, anyway……

A nice intro set, with a beautiful minifig, designed to get you lusting after the bigger sets in the series. It certainly worked on me.