Time for the Lego 250 reviews to hit up a new theme. This time we’re heading into territory very close to my heart: the world of ghouls, ghosts, vampires, and werewolves. It’s the creepy wonderment of the Monster Fighters theme, and the introductory set 9461 The Swamp Creature.

Monster Fighters was a wholly original theme that debuted in 2012. Because it wasn’t licensed, and wasn’t likely to bring in as many dollaroonies as simply cranking out another obscure set of buildings that appeared in the background of a Harry Potter movie for four seconds, it lasted exactly one season, involving ten sets and a couple of polybags. I have seven of them: you’re going to be reading a lot about this theme. 9461 The Swamp Creature is the smallest of my collection, coming in at just over 60 pieces, with 2 minifigs. 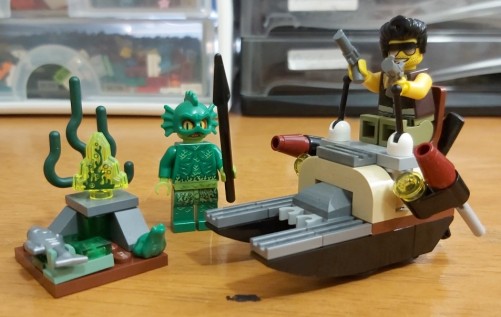 The monster fighter guy is just happy to be here. The Swamp Creature maybe not so much.

The smallest set in a theme should do several things. It should serve as an accurate indication as to the argument kids can resort to when guilting parents into buying the expensive sets. It should have some level of playability that lasts longer than the six minutes it will take to build. And because the set is too small to brag about, it should have contain at least one minifig worth showing off to make your friends jealous. 9461 The Swamp Creature satisfies on all fronts.

The build itself is fairly basic, consisting of a swamp boat and a small outcropping upon which rests a transparent ‘moonstone’, the plot token of this particular theme. For once the not-like-us bad guys of a Lego theme actually are the bad guys: the narrative furphy involves the monsters attemptingto collect the stones to provide their leader, Lord Vampyre, with the power to unleash a monsterpcalypose upon the world. Which, I’m guessing, isss… bad?

It’s a very quick build, but it’s playable enough, and given their similarity in size, the two components should be happily swappable with second siblings to ensure everyone gets a fair shake.

Good enough to give everyone a turn, not so good that anyone’s going to feel too special.

The real attraction here are the minifigs. The human, Frank Rock (thanks to Brickset for providing this incredibly important information that I have never cared about), is impressively detailed, but it’s the Elvis quiff he’s sporting that is the real prize: there are about a million dioramas where it would fit wonderfully. The Swamp Creature himself (Or, actually, herself. There are no genitals or boobies at play here) is just gorgeous. The printing is crisp, and clear, and goes right round the torso; and that headpiece is fantastic. This is a figure that would be at home in a monster diorama, or an alien one, or a post-apocalyptic one…… it’s the highlight of the set by a fair margin.

9461 The Swamp Creature is a nice little set, worth the prices of admission for the Creature alone. It doesn’t set any worlds on fire, but as a guide to the larger, more complex sets in the theme, it encapsulates the look, feel, and intent perfectly.

A solid little set that provides a good introduction to a fantastic theme.