Today’s Lego 250 review proves that big isn’t always better, especially if the set in question pulls all of your nostalgia feelz out of your body and uses them as skipping ropes.

Things you may have noticed if you have been reading these reviews:

Which leads us to Benny. Or to give him the name nobody after the first moment he ever said it used, 1980-Something Space Guy.

You know you love him.

Everybody loves Benny. He’s the reason spaceship, spaceship, SPACESHIP! is part of the lexicon. He’s the owner of the single coolest set to come out of the first Lego Movie (And yes, I have it, and yes, I’ll be reviewing it, and yes, you can probably guess which end of the ratings spectrum it’ll land on before we even start.) If you don’t love Benny, you’re probably slightly dead inside, think the Nationals are a real political party, and have a platypus-skin hat somewhere at the back of your wardrobe. You’re just that kind of person.

Classic Space made the minifig. And minifigs are now so popular that you can buy them in mystery bags (Ask me how addicted I am to the current DC Superheroes series…..), and, occasionally, in sets known colloquially as ‘battle packs’, so named because they contain up to five minifigures (Or in Doctor Who terms, an entire army plus two spares) and a small build. The idea being, you can quickly collect enough of them to build an army. Which Lego doesn’t do because something something violence and military something but there they are anyway.

So what could be a better fit than a Classic Space minifig battle pack centred around Benny? I’m glad you asked.

How about a Classic Space minifig battle pack centred around Benny with a new coloured minifig?

How about a Classic Space minifig battle pack centred around Benny with a new coloured minifig IN PINK?

Oh my God, a pink space minifig! Or to put it another way, OH MY FREAKING GOD, A FREAKING PINK SPACE MINIFIG!

So meet Benny, and (according to Lego) Kenny, Lenny, and Jenny. (The pink minifig is Lenny.) Along with two small vehicles designed to remind old farts like me of classic first wave vehicles 885 Space Scooter (the first Lego set I ever received) and 886 Space Buggy (which I remember cost $2 back in the day, so I had several). The nostalgia-meter is off the frigging charts with this one, and as an official OFFOL (Old Fart Fan of Lego), you know I was always going to be in love with it.

Be still, my beating childhood heart.

And to make it a proper battle pack, there’s a fifth minifig — or third build, you decide– included: a cute little robot made up of about half a dozen pieces. 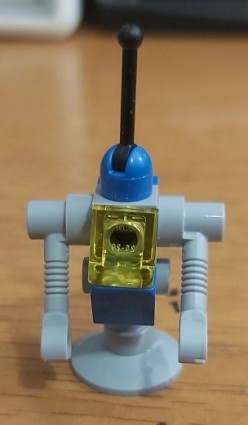 Somehow, the fact it’s completely unnecessary makes it all the more adorable.

Look, the truth of the matter is, how you respond to a pack like this depends on how deeply you’re wedded to the theme in question. I can walk past a million billion trillion Star Wars battle packs and not blink twice. The concept of a Harry Potter battle pack would make me dislocate my yawning bones. A Classic Space pack came along and I picked up two before my wallet finished its morning stretches.

Whoever designed this pack loved and respected the original theme. The minifigs are almost indistinguishable from their original counterparts. The vehicles are both immediately recognisable and, like the best homages, a delightful update on their original counterparts. There’s enough of a flashback to excite the kid in me, and enough novelty to make me want to use it to expand my collection. Forget all the guff I’ve been spouting about playability, swooshability, blah blah blah. This is nostalgia porn, pure and simple. It’s cheap, it’s a total money trap, and I loved it beyond all sense and reason. And if you think I’m not going to be hitting Bricklink and smashing my wallet against a whole platoon of Lennys when I get back to Perth and can finally start building dioramas for Bricktober again, you just don’t know me at all.

They got the band back together…