Today’s Lego 250 review takes us to the heart of the Lego empire. We’re visiting the City theme, the Alpha and Omega of all things associated with the brand, and reviewing one of the countless small sets that have been released over the decades: 4427 Fire ATV.

Lego is built on small sets (See what I did there?). It’s also built on the City theme (No, seriously. Did you see it?). There have been more City sets released, for longer, than any other theme. It is the bedrock of the company. And apart from the fact that every few years sees another reiteration of the Police Station (I have two) , and the Garbage Truck (I have three), and the Mobile Police Unit (Two), and the ambulance, and the hospital, and so on and so forth, because generations spring up every half decade and you’ll never go broke providing the basics, there’s a constant need to provide variation, and expand the limits of what the theme means. So, in recent years, we’ve seen City embrace Arctic exploration, and underwater rescue, and travel to the jungle, and the forest, and a whole raft of different sub-themes. But the standard City quartet of police, ambulance, construction, and firefighting still underpins the theme.

4427 Fire ATV is a small set. It’s 43 parts, plus one minifig, forming a single small vehicle. It’s very much a starter set, designed to be a cheap way into the hobby, or as a quick way to pad out a collection or diorama.  There’s not much to it. It’s a quick, uncomplicated build, using standard pieces. There’s enough of a range in them to hint at the delights to come when you persuade Mum to buy you that $200, 1000-piece behemoth for Christmas. 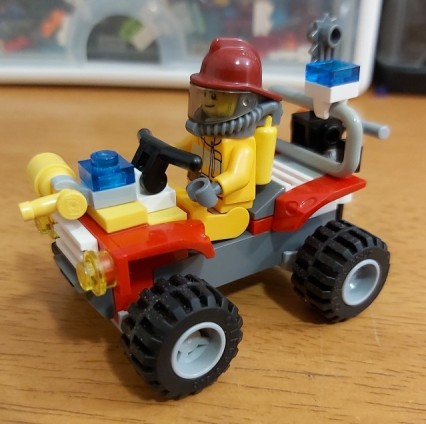 Speed Buggy needed a proper job after all that sweet syndication money ran out.

The highlight of the set is probably the minifig: it’s beautifully printed, and the three-piece fire helmet looks fantastic.

The erstwhile firefighter, with his axe and his holygodwhatthehellisthatthing?

It’s a set. it’s cheap. It’s small. It does exactly what it should: give you ten minutes of enjoyable building while you wait for dinner to cook. It looks good. There may not be anything to point to as being outstanding or exciting, but equally so, there’s no weakness or flaw. It looks, feels, and builds exactly like what it is. Sometimes you don’t need to ask for more.

I’ve no idea how a mustard bottle helps fight fires, but hey, I’m not the expert here…

An enjoyable distraction with no flaws. You can do worse.