Pinch and a punch and a Lego 250 review for the first of the month. It’s time for the one-joke character from the first Lego Movie to show he wasn’t worth an entire movie of that one joke for himself, as the Lego Batman Movie brings its own brand of tedious charmlessness into the set building experience. But is 70904 Clayface Splat Attack any good?

The good news is, it’s better than the movie. The bad news is, that’s not saying much. The Lego Batman Movie set new lows for cynical cash grab sequels, but it’s almost impossible for a character with as brilliant a rogue’s gallery as Batman not to produce a good set every now and again.

The highlight of this build, and indeed the entire focus, is the brick-built Clayface figure. The set consists of almost 450 parts, and just about all of them go into it. And an extremely clever build it is, too: from the flexible brick-built ‘face’, to it’s exceptional poseability, to the arms that swap over from gun to hammer and back, someone was having an ‘A’ day — or, at least, paying a shitload of attention to the Bionicles table at the local fan convention — when they designed this baby.

An added attraction is the colour. A limited colour palette can be a turn-off when it comes to buying a set, and this certainly has one. Buuuuuuut that colour is unusual enough to make it an attraction in its own right: it’s called ‘nougat’, and it’s rare enough that having 80+ dots and 60+ round plates in one set is less of a monotonous building experience than it is a single-shot parts pack.

The rear, showing all of those dots and round plates, and the amazing construction of the arms.

Not to mention that the set is rife with clever building techniques, so that the act of building in very few colours never feels boring. Putting together the Clayface figure is actually a lot of fun, and the end product looks absolutely fantastic: as hard as is it to represent a semi-liquid substance like living mud in hard plastic blocks, this set comes close. It’s extremely solid. It stands well, is well-articulated — including the head, which rotates on a single ball joint like a triceratops, but is always balanced by the construction beneath — and can be posed in a multitude of ways. The figure sits somewhere between action figure and play set, and works wonderfully well in both ways. 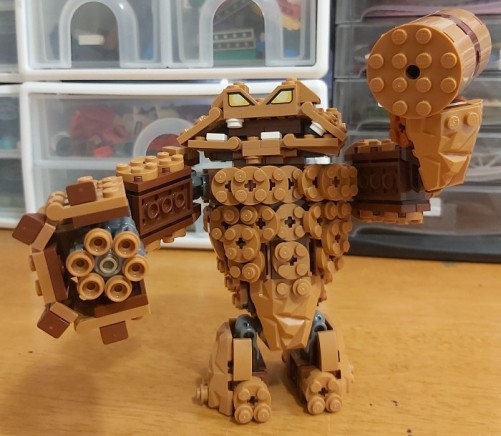 The Sibling Build is not worth mentioning: a mud cowpat with an anonymous figure in it (Memory tells me it’s the Mayor, but damned if I’m going to subject myself to the movie again to find out). A Batman Movie Batman that’s no different to the one you got in the Lego Movie sets you bought two years previous rounds out the set. But they mean nothing. This set is all about that main build, and it’s an absolute cracker. 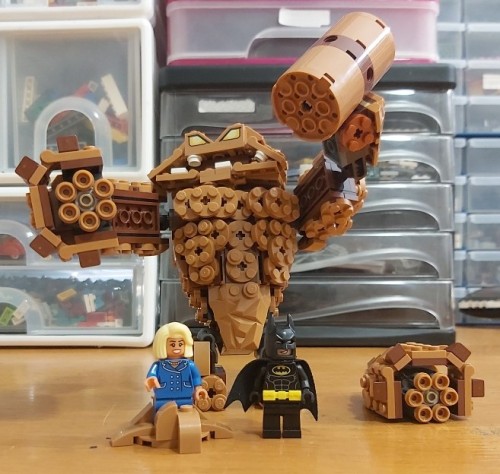 The whole set, including Mayoral cow pat and spare arm.

70904 Clayface Splat Attack could easily have been a raging disappointment: a single large figure, in pretty much one colour, from a movie that had nothing to recommend it. But thanks to exceptionally clever design, enjoyable building techniques, inspired colour choice, and an end product that just looks great, it turned out to be pretty damned good.

A good example of what can be doing when you take the design brief and run with it as hard as you can.