Time to revisit a time of adventure, of exploration, of ripping into the tombs of other cultures and making away with their shiny golden things before they notice… it’s another set from the Pharaoh’s Quest theme! Let’s have ourselves a look at 7326 Rise of the Sphinx.

Little sets are fun. They’re quick to build, often use parts in creative ways; and have a habit of including interesting colours, transparent parts, or glow-in-the-dark elements to entice you to pick them up. But when it comes to big sets, you want something extra. A big set needs to look especially impressive when sitting upon the shelf, or be particularly playable, or do something especially tricky and joyous to make the investment worth it. Because let’s be honest, Lego is frigging expensive.

Sometimes, of course, you get a set that manages all three. 7326 Rise of the Sphinx is one of those sets.

The first part of the equation is relatively easy. Rise of the Sphinx is part of the Pharaoh’s Quest theme, and ancient Egypt has always held a cornucopia of rich visual references for Western designers to draw upon. As an icon, the Sphinx has crossed over into several cultures from ancient times: Greece, Phoenicia, Assyria, Mycenae, Persia… all incorporated the creature into their own mythological pantheons. It’s a deep visual well to draw upon. This set does it beautifully, combining the classic pose of the Great Sphinx of Giza with an architectural Anubis head that rises up in long, angled spires. 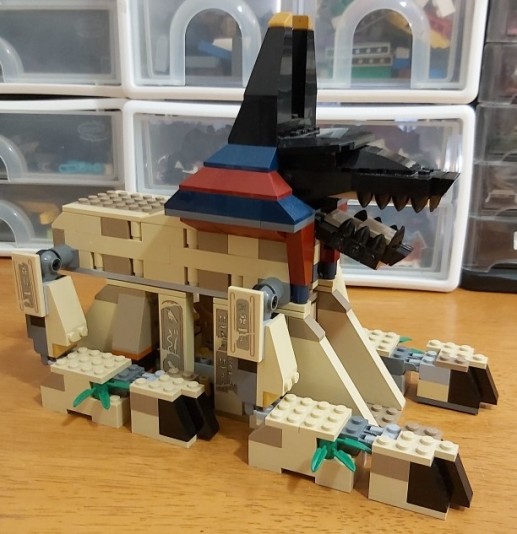 Reminiscent of a more famous, and you know, more actually real, Sphinx, but with a personality and look all its own.

It’s playable, too. Keen-eyed readers will have noticed the leg joints in the last picture. This Sphinx walks. It rises up from its crouch. It opens and closes its jaws. because it’s not just a statue. It’s a guardian, defending a treasure that lies between its paws. And because this is Lego, and looting other cultures is a core aspect of so many of its themes, the sphinx has somebody to defend its treasure from: the Sibling Build is an LRDG-style open car with Cocky McSideburns at the wheel, ready to use the time-honoured careful archaeological technique of blowing the shit out of things with dynamite to crash through the priceless walls and wrap his grasping mitts around… well, basically it’s a shiny sword on a stand.

Let’s be honest: by any measure, this guy’s so skeezy even Tom Cruise would ask for a rewrite before he helped to tank a movie about him. 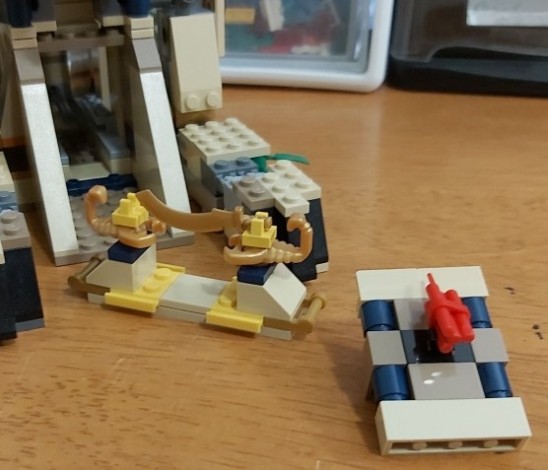 Seriously, douchebag. Have you never heard of a pointing trowel? Zahi Hawass will eat your liver in front of your children for this!

It looks great, it’s totally playable, and it has a couple of surprises in its kitbag. Not to mention two gorgeous Pharaoh Mummy minifigs to round out the ensemble. Only a cynic would wait for an inevitable ‘but’ at this point.

I spy, with my single glowing eye…

There are weaknesses. The front wall that hides the treasure is very loosely held. In order to enhance the playability of blowing up a wall with explosives that don’t actually explode, it sits on nothing more than two studs and a smooth floor. It’s tall, and thin, and falls over when the wind changes direction. Which is a pain when the sphinx is crouched over it. You either have to remove the entire structure, or try to fiddle about with two fingers crooked into odd positions to try and replace it. Again. And again. And… oh, for Pete’s sake!

As good as the sphinx looks when crouched, and as fun as the movability is, once the statue has, indeed risen, it looks… well, odd. Gangly. Not so much fearsome as… newborn. It looks less likely to savage an intruder than to fetch him a soggy giant tennis ball and bounce around, waiting for it to be thrown.

They’re not fatal flaws by any means. Just small ones, but small ones that are central enough to be constantly noticeable. 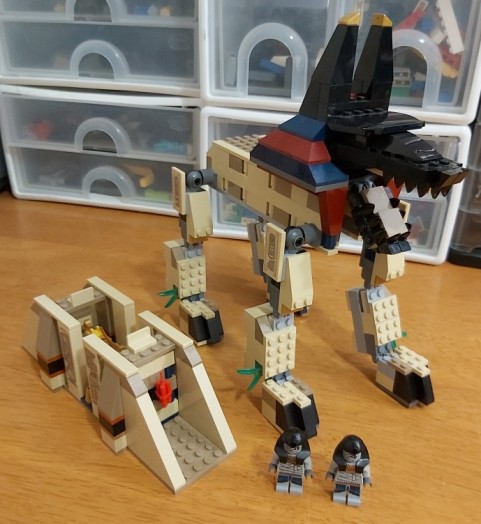 7326 Rise of the Sphinx is a gorgeous set. It does all the things you want a Lego set of its size to do. But it’s also a lesson in how the gap between perfect and not-quite-perfect can be large enough to irrevocably change the perception of set. It’s a good set. Really good. But it could have been great, and that’s a shame. 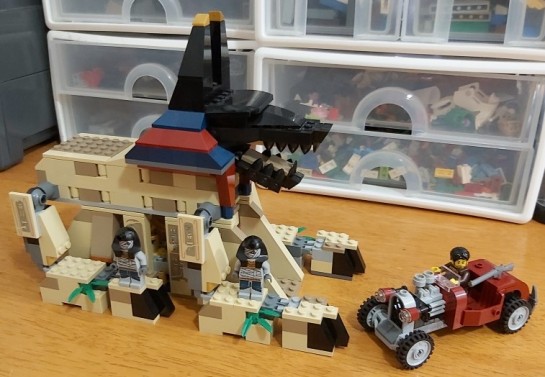 Good looks, fun to play with, but ultimately, just short of perfect. I think I dated this set in Uni…

A great-looking set that is only a few doddering steps away from true brilliance.