First things first: The House of Jack’s Girls, a pleasant little thing published by Pseudopod back in October, has been nominated for the Australasian Horror Writers Association’s Australian Shadows Award. I’m up against a fair roster of talent, but it’s been a while since I’ve received even a nomination, so it’s nice to be listed.

Luckily for you, because Pseudopod is all internettily and stuff, you can both read it and listen to the svelte-larynxed Chloe Yates read it to you right here. Be warned: it’s a horror story, and it’s very much MA15+.

To add to the general joy and all-round bonhomie, Antipodean SF reaches 250 issues this month. The legendary Ion Newcombe has been toiling away for 21 years, consistently providing a voice for new writers and releasing wave after wave of quality flash fiction every damn month– he’s way overdue for all the major career awards in Australian SF, but what do I know?

To celebrate, issue 250 is a massive (relatively speaking) tome, with over 50 stories from some of the most familiar names in the Australian SF scene and the usual healthy dose of rising talent. I’ve got a story in amongst it all, along with many writers you’ll actually want to read.

Good news for those of you with strong constitutions and iron kneecaps!

My story, The House of Jack’s Girls, has been published in PseudoPod issue 616. PseudoPod is a podcast and written e-zine of short horror stories, featuring both spoken and text versions of each story. This issue contains two others apart from mine, and all for the perfectly reasonable price of not a single cent!

Here’s a little treat to start your month off: my story The Smell of Wet Grass, over at SQ Mag, in full, for free.

The read the rest of the magazine, and enjoy that, as well!

Pretty, isn’t it? It’s the cover to the upcoming issue of SQ Magazine, available from November 1st. And if you look in the bottom right-hand corner, you’ll see my name.
Head on over to the SQ website and pick up a copy, to read The Smell of Wet Grass amongst a whole bunch of fine fiction.

What time is it, Mister Wolf?

Fucked if I know, I’ve been hard up against it.

Godsdamn, but it’s been a long time since I’ve had a chance to just sit around and blog at y’all. many reasons, but suffice to say, much of it has been down to general suckage, work-based suckage, business, distraction, and the feeling that I’ve got rather more urgent and important things to be doing.

The main thing of interest to this blog, however, is that Luscious and I have started hanging out with a group of Perth writers calling themselves Perth Write Club. They meet every fortnight at the State Library and Edith Cowan University, on a turn-by-turn basis, and well, they write. Hard. For an afternoon, with a bit of lunch beforehand and a chinwag after.

It’s fab, and the kind of writing group I’ve been missing for quite some time– every group I’ve been a part of over the last five years has eventually ended up with me acting as some kind of defacto free workshop leader, and there’s only so much of that I can take before I want to hang out with some actual peers, please. Lyn and I attend the State Library meetings, and it’s proving highly beneficial to my writing. In two meetings I’ve managed to complete a 4000-word synopsis for the kids novel Cirque and write a 3000-word short story entitled General Janvier. I’ll be keeping this up!

In publication news, Magrit continues to lurk about the corridors of Walker Books. They appear to have some big plans for it– I can’t reveal what, unfortunately, but it might be a little more illustrated, and a little more hard-backy that first thought…… March next year is looking like the launch date, by which time it’ll be older than the audience it was written for.

And I’ve been podded over at Far Fetched Fables: if you’ve not read my 2008 story In From the Snow, here’s a chance to snuggle up in bed, cuddle your favourite teddy bear, and have it read to you. Sleep tight,

Or, to put it another way, I’ve received news that Paradox Books have accepted my story The Daughters of John Anglicus— featuring Trota of Salerno and the descendants of Pope Joan— for inclusion in their anthology Crusader Kings, which will be coming out in December which means you’ll be able to get me to sign it for you for Christmas. If you haven’t already bought it, you can pick up Europa Universalis IV: What If?, which contains my alternative history Napoleon Bonaparte story The Emperor of Moscow, while you’re there.

More details on the how and where of buying it as I get them, but for now, here’s a little snippet to get you keen:
Trota edges past the end of the bed. Once round to the other side she sees the woman more clearly. She is tall, taller perhaps than even Nicholas, and older than Trota expected, being perhaps in her mid-thirties. Long black hair is splayed across a bank of pillows, and her olive face is pale and drawn close in pain. A nightgown is bunched up above her knees and stretches tightly across the rounded bulk of her stomach. A white-shifted old woman dabs ineffectually at her forehead with a damp cloth. She scurries out of the way as Trota approaches, and shuffled from the room, crossing herself and murmuring respectful words as she passed Nicholas. He waves her on her way, and directs Trota to sit on the vacant stool.
“This is your charge,” he says. “She is close to birth, but for the last month there have been… problems. Increasingly so.”
“Why…” She sits, takes the woman’s long hand in her own, and gives it a soft squeeze. The woman turns pain-squinted eyes towards her. She clenches Trota’s hand hard enough to hurt, and hisses as her gut spasms. “Why is there no doctor here?”
“She summoned you.”
“I’m two weeks away!”
“You are the only chirurgeon to whom Her Holiness has granted admittance.”
“You let her lie here for two weeks in this sort of pain. What the hell–?”
“Watch your mouth!” Nicholas’ sudden rage rocks Trota back on her stool. “You are in the presence of holiness. You will not use those words.”

I’m mightily pleased to announce that my story Disciple of the Torrent, which was published in Satalyte Publishing’s Tales of Australia: Great Southern Land— and which I blogged about here and here during the writing process– has been selected for the upcoming Year’s Best Australian Fantasy & Horror 2013, alongside stories by the likes of Kaaron Warren, Deborah Biancotti, Terry Dowling and Juliet Marillier. The full Table of Contents contains enough in the way of quality Australian author name-dropping to drown a squirrel in drool:

More information is available at the Ticonderoga Publications website, and the volume can be pre-ordered at Indie Books Online.

If you’re unfamiliar with the Review of Australian Fiction, it’s a fantastic project which pairs an established author with one on the rise, every two weeks, and makes their work available for a nominal price. Previous issues have highlighted the likes of Kim Wilkins, Trent Jamieson, Melina Marchetta, Christos Tsiolkas, Meg Vann and Kirstyn McDermott.

The current volume is edited by the superfabulous CEO of the Brisbane Writers Festival, Ms Kate Eltham, and the latest issue pairs rising star Amanda O’Callaghan with 8000 words of my own special weirdness called The Canals of Anguilar, which has prompted Ms Kate to draw comparisons with Dickens, Pratchett and Poe. Which I’ll take any day.

Here’s a little taster to whet your appetite:

Her name was Fastny. It didn’t take long to make a decision, once she was amongst us, needling, pushing, refusing to allow us to sink into the complacency that large groups of men, united by a common urge to drunkenness and forgetting, will resort to at a whim. We had no plan, no desire, until she arrived. But fear of her scorn replaced all our separate terrors, and with her nipping at our heels it was only a matter of time before someone mentioned Anguilar.
Anguilar, city of the green walls: more canals than Venice or Tellifluour, so remote that only a journey of seven deserts can take you there. It is not a destination. It is the very reason a journey is undertaken, a place so alone that of all those who set out to find it, less than a third ever get there. Where the others end up, nobody knows: the residents do not speak of them, and arrivals are too relieved to think about it.

It’s available *right bloody now* for the princely sum of $2.99.

Damn, but whilst I’ve been off lounging about the beach crapping about with artists, but people have only gone and bought stories and the like from her Lusciousness and myself.


Where, I hallucinate you asking? Funny you should bring it up…. 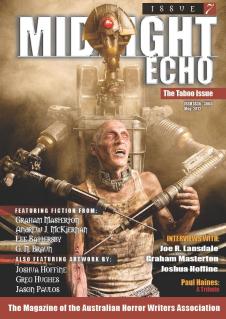 This friendly little fellow is the cover to Midnight Echo 7, unfortunately harmless. He’s the official magazine of the Australian Horror Writer’s Association, and undoubtedly the nastiest little read you’ll read this year, at least until issue 8 comes out. It contains my short story Ghosts of You, which is quite unpleasant, and I say that with all the love in my heart.


Next to him… the nasty Year’s Best Australian Fantasy & Horror 2011. His tiny fangs cause creeping ulcerations of the skin, and his pages contain Europe After the Rain, a story originally published in Fablecroft Publishing’s After The Rain anthology and which I thought had disappeared with a dull whoomph of disinterest, so I’m pleased to see it up and about and being appreciated. 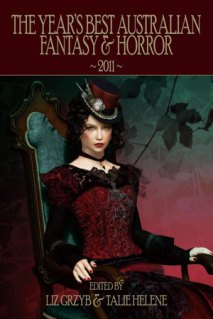 YBAFH11 can be found at Ticonderoga Publications.


And coming soon… my prize, ASIM 56. Isn’t she lovely? And so deadly. Her pages contain twice as many Battersbys as that of other magazines. You see, her contents include The Blind Pig, that is to say a modern fable of the depression by my beautiful wife Luscious as well as my own Comfort Ghost, and eventually… oh sod it, i can’t keep that up.


Everyone knows ASIM is a ripper of a magazine. Their website is here, and I’ll let you know when the issue is due to come out. The Blind Pig is the best short Lyn has ever written, and if you know Lyn’s writing, you’ll know what that means: you want a copy of this magazine, and you want it ASAP.


And if that isn’t enough to make you wonder at just how many people you can fool all of the time, be sure to check out Bete Noire in July, where my poem Three Messages will appear.